My wife and I are currently deep into season 2 of Mad Men. Apart from its amazing period detail we're finding it to be a very deep and fascinating show. Nothing could be further from Dungeons and Dragons than Mad Men's Papers and Paychecks. And yet in commentary on a Mad Men blog I ran across an insight that made me feel tons better about the way I run my game. 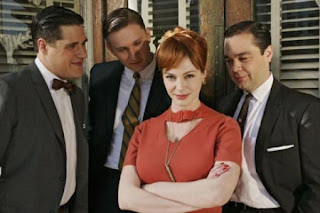 They report an interview with series creator Matt Weiner where he says:

There’s a mystery being unraveled and pieces are not connected and sometimes they are. Some things go nowhere. If there wasn’t stuff that went nowhere, you wouldn’t be excited about the things that go somewhere. When you’re telling a story where you don’t want people to know the end it’s very important that you keep them on their toes.

Later on, one of the blog owners, Roberta Lipp, posts this comment:


This ain’t Harry Potter. Like Harry Potter (sorry, it’s all I had), everything is carefully planted. But unlike it, not everything is some seed for the future. And not knowing which is which does create incredible tension.

This removes my last possible regret about running a campaign where events get improvised week to week and sometimes at the actual table. Once a writer or DM gets serious about running a mature, multilayered game - call it the "Second Edition of the mind" - there is a temptation to take it too far in the scripted direction, and make everything have a point and a purpose. But then you get a life that looks like a story, rather than a story that more realistically is a thread running through life.

Here's how the mind works: it takes the chaos of right now and imposes order on it, connects the dots and tells a Rorschach story. The more things recede into the past, the more the story gets smoothed out. Dream researcher J. Allan Hobson found that people awoken in the middle of REM sleep, when they actually dream, give very incoherent reports. The smoother if still surreal stories we tell to psychiatrists and friends are the product of processing in non-REM sleep and waking life.

Although loose ends can get edited out of memory, their existence can also create suspense, as Weiner reveals. Working in the non-interactive form of TV, Weiner's loose ends can illustrate character points or something about the world. Our medium as gamemasters, though, requires players' active collaboration.

So, maybe we can say that a gaming session becomes relevant to the larger picture the more it holds opportunities for the players to define their characters and to find out about the world. All that's needed are a few overarching structures - the kind provided by the Law vs. Chaos conflict, for example - that doom-laden events and prophecies without a plan can hang from.
Posted by Roger G-S at 12:00