Iron God: Should All Dungeons Have a Climax?

To close out my play report/review of Matt Finch's Tomb of the Iron God, here are some of the changes I made in actual play, in line with my last post about dungeon story. Spoilers follow.

The goblins had smart leadership, and I played it that way. After their group took about 50% casualties  in one epic battle, I had them leave the dungeon. In a later session they snuck back while the party was in the dungeon and blocked their exit with a large rock. Although the party eventually moved the rock by chipping away at the doorway (soft limestone), the tactical situation they walked into, fighting up on a stair surrounded by enemies, was almost suicidal for the party. They only prevailed by  luring the overly enthusiastic goblin troops back downstairs into a much less favorable position while their leaders were still under a sleep spell.

I also thought it wasn't realistic to have the animated iron statue of Ardarus just stomping around the same area as the goblins. I decided that the goblins had confined him to his room by stopping the door with an iron brace, but that when they left the dungeon they threw the bar into the storage room. The clues were the notches still carved into the wood of the door and the stone of the ground. The party picked up on the clues and found the abandoned brace. So they approached the room with extreme caution and were able to block the door again when the statue came to life.

The second level raises the question: should all dungeons have a climax? Tomb of the Iron God is interesting that way.  Its "goal" area - the caverns of the Iron God -  comes on the first level. The second level is a series of strongly themed rooms, where undead stalk, and treasures and other things are hidden in the burial niches carved in almost every wall. In hindsight this arrangement was fine, because it helped preserve naturalism by defying the conventional expectations.

Also, in play it turned out there were a couple of strong concentrations of dangers and treasure on the second level which created climaxes of their own.

The climax I helped to juice up was the three-sarcophagi room. Here, I added a lone ghast living in the secret chamber under the middle tomb. The ghast, it turned out, while still human, had been a mastermind behind the priests' turn to necromancy, and left a diary behind for the players to puzzle out. The poison gas trap in that room, I moved to the left tomb (realism again - if the middle tomb had been disturbed, why was the gas trap still working?), and signaled it with the effigy on the tomb: an alchemist surrounded by toads, snakes and spiders.

The other was the room with an army of skeletons. This proved a tactical challenge on par with the goblins, and this time everything came from the module, which explicitly details their maneuvers. To their credit, the party saw groups of skeletons peeling off into the side corridors, and decided to fight a retreating battle rather than be outflanked. Eventually they found a strong position behind an opened pit and emerged victorious.

All the same, more could have been done with the story behind the undead. Having skeletons and zombies detailed into guard duty and menial tasks ... finding the necromancy lab where they were raised ... having some clue of why the decision was made to raise them (from town and some documents in the dungeon, I let the party conclude that it was part of the extortion of funeral customers ... pay up more or your loved ones are consigned to a walking hell) ... and how the much more evil switch was decided on from mindless undead to creating actual ghouls (this, I revealed through the ghast's diary, was his doing,  connected to the cult of Orcus.) 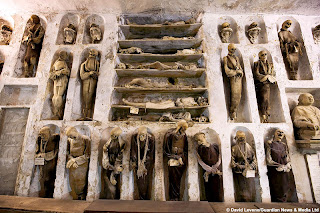 Another realistic consideration I added: what the families who buried their dead in the catacombs would have done once they found out that corpses were walking around in there. This created a number of missions for the party, where long-dead loved ones identified by particular personal items were sitting in one niche or other, and a bounty would be paid for the return of their bones. This kind of issue marked a larger opportunity for dungeon-story development that I mostly missed this time around. Are there haves and have-nots in the burial places? Did one group of people get singled out to be turned into skeletons and zombies? Is there a special section where the monks themselves are buried?

If you're running the module, I found that the second level tends to drag on a bit. I would recommend you trim anywhere from 4 to 8 of the rooms, or replace them with a different styled area ... perhaps a necromancy lab and makeshift shrine to darker gods.

And again, just because I'm pointing out how the module could have been better, doesn't mean I'm slamming it. It is a great setup, and it's probably more fun to work out these details yourself than to get them store-bought. If I run the Tomb of the Iron God again I will certainly take some of these ideas into account and make it a dungeon with a much stronger story behind it. Not a story with an artificial climax like the level boss of a computer game, but one that's woven all through the dungeon. I want to leave players with the impression that their exploration has been about more than filling in a sheet of graph paper.
Posted by Roger G-S at 09:58