Well, here is the first of six wilderness tables to be completed. 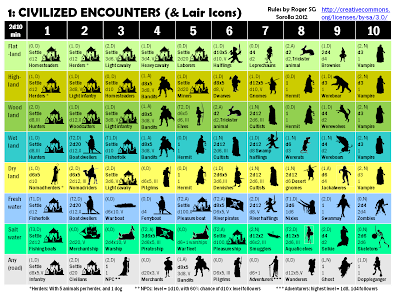 This is not everything you can encounter in a civilized area, but rather all the "civilized" themed encounters - humans, other friendly kindreds, and a raft of shapechangers and oddballs. The idea once more is to have a priority of types you can encounter (so that the priority 2/1/4  puts chart 1, civilized, in the middle) and then roll 3 or 4 d6 and take the highest die in the priority that comes up.

Working off that, you consult a chart that matches the terrain - for example, a road going through forest would give you:

I'll have a set of terrain charts at some point.

Finally you roll 2d10 and take the lower, to give you an encounter. Here's how to use this on the fly.

An X here is a being without a lair; a T means the creature will only be encountered in its native terrain. This last one is more relevant for the hexmap stocking and encounter method I've described before.

A "Settle" lair means the beings can be traced to a settlement in range, or if you have not mapped any settlement, a small community of fewer than 100 people.

Some unusual encounters: Homesteaders are just farmers; Wanderers are gypsies, tramps, refugees, or your world's equivalent; Hermits are clerics of that level on a d20 roll of 1-10 and just eccentrics on 11-20; substitute froglings, rabbit people or whatever if you hate halflings; Trickster animals are from my Varlets and Vermin collection; Swanmays and Selkies are from Monster Manual 2 but quite traditional benevolent shapechangers.

I'll let you know when the new silhouettes are added to the zipped download file. Fairly pleased with my werewolf, werebear (based on some long-legged prehistoric bearoid), doppleganger (somewhat distorted from a public domain chupacabra) and swanmay.
Posted by Roger G-S at 01:11