So the party goes carousing, and Shakira the male dwarf (don't ask) rolls 16 on my carousing table:

I take a few minutes to visit the excusado and tell the players to come up with some suitable dare.

It should be noted that we are in the town Kaserolle, renowned for its annual cheese-rolling competition. It should also be noted that Australians are fond of spectacles involving the rapid transit of dwarfs. I'm not going to say it was our Australian who suggested it, but when I came back, the gauntlet was thrown. The dwarf was dared to roll down Cheese Roll Hill inside a great hollowed-out wheel of cheese.

The cheese was made ready, the dwarf lodged within. The rolling through the streets, out the gate, and to the summit of the hill began. Numerous saves vs. nausea had to be made and the dwarf ended up losing a few hit points along the way.

Cheese Roll Hill, as it turns out, is no bunny slope. Perils include the precipitous Great Gorgonzola Leap, the sharp rocks known as the Grater, and a lethal old pine tree in the middle. The aim was to roll the dwarf-enhanced cheese through the town gates. If you hit an obstacle, you take the damage on the die, and the concussion from the Leap was worth d6.

Using analog simulation principles, the cheese-plus-dwarf was represented by a one pound coin. 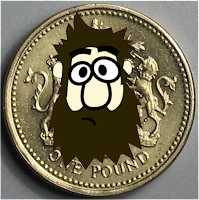 Mike, the dwarf's player, angled the cheese-coin just right and wound up rolling off the Leap, taking damage but missing all the obstacles ... and the gate ... in fact, missing the walls altogether ... 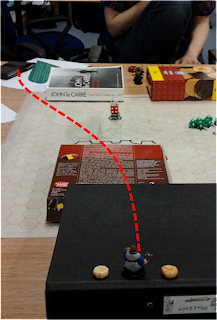 What was on the south side of Kaserolle just beyond the walls? Why, a river and some washerwomen's huts. I set up the ramp again, laying down huts using regular d6 (representing damage) and emotion dice (representing attitudes of inhabitants if hit... both angry ...) The cheese missed all the huts and went into the river. I said, what the hell, roll d6, on a 6 there is a fresh water encounter. 6 comes up, and after some more rolling on my under-construction encounter table ... 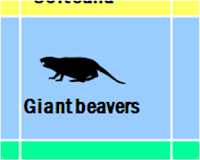 What better beast to bedevil a Canadian? The beaver, of course, starts gnawing at the cheese that is keeping the dwarf afloat. Clutching to the last chunk, Shakira gives the critter a sharp elbow. "Intelligent but docile" - the beaver, annoyed, tail-slaps the dwarf out of the river and onto the bank, doing more damage and taking him down to 1 hp. The beaver climbs up, but the approach of the rest of the spectators and Rex the dog quickly chases it away.

The spectators, cheering and fist-pumping, take the dazed Shakira and toss him in a blanket. Coins get thrown into the blanket until he has recouped all the money he had spent on ale and the cost of the cheese. The tale of the dwarf is told and retold all the next day and will no doubt become a legend of Kaserolle.

I was actually thinking of making my carousing table more matter-of-fact, giving results that can take effect instantly, so that players can carouse at the end of a long session without more fun and games. I'm not so sure about that any more ...
Posted by Roger G-S at 22:07