Iron God: The Pit, the Pole and the Point Dwarf

This post has spoilers for Black Blade's Tomb of the Iron God adventure module. But not any spoilers for my players who have marched through most of it. So be forewarned and see you on the other side of the cut. 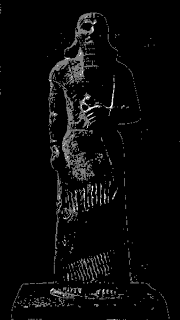 Let me just start by praising the first level of this module - with its three main paths that link together again in interesting ways, its variety of shape and construction plausibly outlining the dwelling of an order of monks, the succinct meaningfulness of its rooms and their unfolding story of the monks' downfall. The selection of room contents is also great - some empty, some meaningful, some mysterious. There are threats out of the party's league - and the ways and means to fight them. There are no forced puzzles, but quite a few naturally set-up problems to be figured out with wits.

And then ... like zits ... there are five or six pits with no explanation other that they are ten feet deep. Some of them guard the entrances of the complex, true, but others are there in completely baffling places. Why would monks dig and conceal a pit in an interior corridor of their living quarters, not really near anything of value? My players, sharp and savvy, asked the same question, but chalked it up to the dungeon genre, and soldiered on. 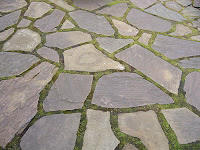 Well, I tried as best I could to make these Player Skill Pits. The corridors where the pits were dug, carved out of the raw limestone, had been floored in a flagstone mosaic of red, bluish and gray slates, the better to hide the outline of the traps. These flagstones, when they covered the pit, rested on a light construction of wood that would break when a halfling or heavier walked across them.

Disadvantage of making things up as you go - once the players saw the first of the special corridor floors they got wary and brought out the ten foot pole, whose tapping was effective in rattling the loose floor-stones of each pit. Maybe they'd have been less cautious if I'd thought to tile the floors when they first entered.

Level 2 was a different environment, but still as full of pits as a bag of cherries. I had the "special floors" painted with plaster - no more rattling under the touch of the pole! Now the pits were covered in planks sturdy enough for a wandering rat or skeleton, but not a fully fleshed person. The point dwarf Shakira (he of the cheese roll) made a lucky save at the first one, and from then on, he became the pit detection device, tied to a rope and ready to be yanked up.

Thanks to the players' wits, the pits got to deal out their d6es less often than they otherwise might have. And actually, I was glad that the player skill approach let me leave behind the oh-so-familiar zap-trap procedure. As it turned out, the pits damaged exactly one PC, who failed a save as he was crossing the safe ledge along a detected pit while under attack by goblins.

Instead, the pits were a combat feature, first in the fight with those goblins, and then a vital obstacle during the epic running fight with a horde of skeletons and zombies from the second level. Being unintelligent, those creatures had a chance to fall into a pit as they walked up to it, and had to wait before figuring out how to cross by the sides. Perfect example of how a smart party can use the dungeon against the dungeon.

But if I had the module to redesign, I'd deploy the pits in places that would have been sensible for the defense of the catacombs and their treasures. There's enough naturalism in the module that it's a shame not to go all the way with it.

Next: The Iron God's secret doors - in which player skill meets detection rolls.
Posted by Roger G-S at 22:23