I don't know why it is that of all the random bits-and-pieces monsters you could make (rabbit-headed giraffes ...rhinos with butterfly wings ...) there seems to be something natural, almost inevitable, about the dog with a beak. 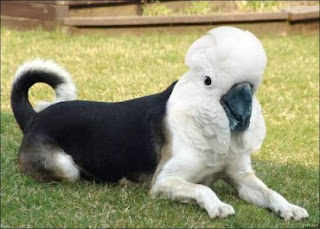 This no doubt comes from the unholy mental stew of Dwarf Fortress (where the "beak dog" is a thing) and Moorcock's hunting dogs of the Dharzi, as immortalized in the first edition of Deities and Demigods.

A third, weird influence: the Montauk monster, often described as a beaked dog but in all likelihood a bloated, rotten raccoon with the face eaten away. How boring. Doesn't the government have a high-security research facility on Long Island? Haven't they been experimenting with ways to summon the Eternal Champion? Or at least communing with the Mad Archmage Xagyg?

Anyway, the inevitable part is this: the two animals most often domesticated by humans for hunting are the dog and the hawk. Put together the bloodhound's nose and the eagle's eye and you have a near infallible tracker. So then ... the beaked dog. Sorry, Fiend Folio, I do believe you can take your devil dogs back to the Drake's Cakes factory, and tell your death dogs, "Hey, more heads is not better."

Using the Old One-Armed Man protocol, we'll start them as a wolf, add a hit die for mutation and presto... Not quite as tough as the Dharzi dogs were statted up to be but then again, those had to be some kind of match for Elric.

The beaked dog is a long-ago creation of the same mad wizard who cobbled together the much less useful owlbear. The race is now kept and bred for hunting by creatures of unusual tastes and appetites, as well as roaming wild across weird and trackless plains in packs of 2-12. Its keen hearing, smell and sight make it a near-faultless tracker (only 5% chance per mile of missing a scent or visual trail) and impossible to take by surprise. Because of the creature's rarity, beaked dog eggs, laid in clutches of 3-7, are worth up to 1000$ each.
Posted by Roger G-S at 21:55