In the chronicles of the long, bong-bubbled affair between fantasy literature and rock 'n' roll, no writer has plunged deeper in than Michael Moorcock. At three five-year intervals - 1975, 1980, 1985 - his hero Elric phased through hi-fi speakers to the delight of nerdy teens, brought to life by the legendary bands Hawkwind and Blue Öyster Cult, through lyrics penned by Moorcock himself.

Hawkwind and BOC, actually, have a lot in common. Both were born in the late 60's, early 70's rock scene. At that time many questions that were later to incite bitter civil wars were being tried out from both sides, sometimes by the same band and sometimes in the same song. One such question: loud and fuzzy and sludgy, or precise and artistic and clean? Before the Sex Pistols and Ramones squared off against Pink Floyd and Yes, the early albums of Hawkwind and BOC pitted psychedelic reverb and science-fictional lyrics against the guitar crunch that would go on to fuel generations of punk, metal and grunge.


Hawkwind: Urban Guerrilla (1973; later covered by Mudhoney among others)

BOC: Cities on Flame (1972; later covered by Iced Earth among others)

Between the two bands, BOC's advantage is that their lyrics and approach always hit that fine point - gonzo, but not silly, a kind of controlled, knowing over-the-top. If they were roleplaying sessions, BOC would be Expedition to the Barrier Peaks with Erol Otus GMing, while Hawkwind would be Middle Earth RPG run in costume where the big reveal is that Tom Bombadil is an evolved life form from the Cygnus Nebula.

(Then again, the Cult's music eventually dead-ended into a kind of optimized, Jim Steinman,  album-oriented rock. Hawkwind has had the more illustrious influence - their bassist, Lemmy, would go on to found Motorhead, leaving an indelible mark at the boundary of punk and metal.)

Anyway, Moorcock's first outing with Hawkwind came on The Warrior On The Edge of Time. Apart from the title reference to the Eternal Champion, Moorcock himself intoned relevant-themed poetry on three of the album's tracks, like this one:


Hawkwind - The Wizard Blew His Horn

Best of all was when the gatefold opened up, a flap fell down and it was revealed that this seeming innocent record album cover was actually a shield ... The Shield of ... hold on, I think it's got letters on it ... The Shield of Chaos! 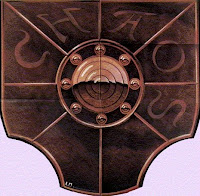 Fast forward to 1980, where Moorcock writes the lyrics to "Black Blade" on BOC's Cultosaurus Erectus album, first person from the point of view of Elric himself. And the band goes wild with sound effects, Vocoder and Hammond organ:


Moorcock also contributed a couple of lyrics to other BOC albums, but "Black Blade" is tied the closest to his fantasy works.

Now it's 1985. Most of the prog class of 1970 is reinventing themselves. Floyd have broken up, Yes, Tull and Genesis have gone radio-friendly, King Crimson have followed Fripp into the experimental guitar maze. For Pete's sake, This is Spinal Tap came out last year! Yet oblivious to the mockery, Hawkwind and Moorcock thunder down the rails. They crank up the earnestness of their sword-and-sorcery stage show to 11 with an entire concept album about Elric called The Chronicle of the Black Sword.


Ah! Where now is the will to wretched excess? Where now are the swooping Elric mimes? Lost, my friends, smothered beneath the sands of irony. I love this stuff, but I can't really recommend it to the coming generations (although there's every chance a smart 11 year old kid would really dig BOC.)
Posted by Roger G-S at 14:38