All right, by popular request here is a sample of my one-page wilderness system in action.

You, the DM, have prepared a dungeon at once naive and ironic, located as it is atop a beetle-browed eminence called Skull Mountain for all the right reasons. You've prepared wilderness hexes covering all reasonable approaches to the mountain and the adjacent hexes, populating them with a mixture of rolls from the Fiend Folio outdoors tables (but replacing Carbuncle with Centaurs; cmon, a carbuncle?) and a few odd features from the Wilderness Alphabet. 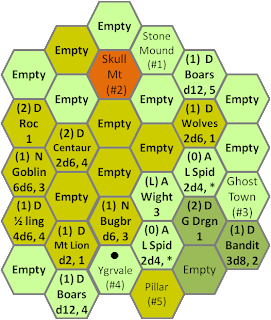 The party starts 20 miles to the south in a frontier town called Ygrvale. The Ygrevalians tell of ongoing skirmish wars 'twixt them centaurs an' them haffalings an' them gobbalings and bugbears in the hills to the north. A slight detour takes you through clearer terrain to the east, though. Maybe the locals tell you about the green dragon who lives in the woods just by the detour. Maybe they don't, because the dragon lets them skip the yearly maiden sacrifice if they send him some people with bags full of money and magic items every now and then. The dragon is in league with nearby bandits, who guard his lair while he sleeps in return for being allowed to live.

(It's just this working out of relationships ahead of time that explains why I like this method, compared to random rolls on a table.)

Off you set, your laden mule and footborne henchmen giving you a rate of 9 (90'). We'll say that you can use 3 of those points to enter a plains hex (light green), 5 going through hills, 6 for forest and all 9 to climb the mountain. Advanced maps might have trails, or routes of easier going marked out by landmarks, that take fewer movement points. 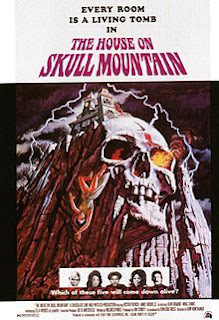 The climb is peaceful. Skull Mountain's rooms are found to be exactly as advertised. No jive - all of your five come down alive, hauling fat sacks of treasure.

Coming back, the party agrees to steer clear of the dragon's woods, now they have some real capital gains to be extorted. They decide on a slight detour through the more heavily populated (unknown to them) row of hexes heading down on the west. To make things short:

The first day is uneventful, the silence of the night only broken by the loud sound of centaurs mating somewhere over a hill crest (rolling a 9, you let them have another clue to the centaur hex even though they're not moving, it helps build the ambiance of the hills).

The second day and night pass absolutely without incident, the night camp just north of the mountain lion hex.

The third day's hex entry roll is a 1; they've found the mountain lion's lair with an angry lioness defending three cubs! A henchman is mauled, but the lioness is finally slain; the ranger captures one of the cubs as the others scatter, and takes the mother's pelt in lieu of treasure. The DM crosses off d2 from the mountain lion hex and write in "1" - there's going to be a male mountain lion out for revenge in the hills ...

The only encounter left in the day is a 2 rolled on entering the Ygrvale hex, a patrol from the town that seems amazed to see the party alive at all... And they're sleeping on a down mattress tonight.

Of course, a real killer DM who played monsters to the hilt would have the green dragon get savvy to where the party were going, and trail them to the Skull using every ounce of its guile and spellcraft, for a chance at some of the real loot.
Posted by Roger G-S at 21:31