1P18PT is not a Canadian post code (well, maybe it is, who knows?). Rather, it is my new rule design principle. I like to have to simplify rules down to fit on one page using no less than 18 point type, and the benefits of this commitment to simplicity, I've found, usually pay off in actual play or writing. With this in mind, the final version of Original Standard (click to enlarge): 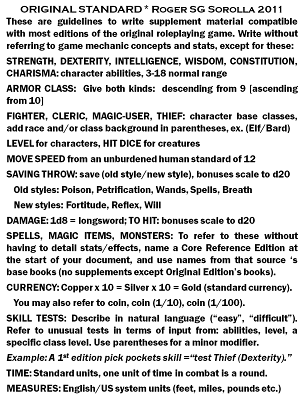 A few things. I figured out a way to give a standard reference to skill tests you want to implement, based on the input to the test rather to the actual die or numbers used. Most inputs to a skill test, apart from circumstance bonuses or penalties, come from a character's abilities, class or level, if there isn't a specific skill for it. For things that are often used, you may not need to do this, but if there is a weird test in your adventure (fishing a key from a drain with a piece of string, for example) you will want to say what stat is used, whether level should count, and whether level should only count for certain classes.

I also had some thoughts about broadening the standard to cover most Old School games (T&T, Chaosium, TFT). I thought about terms like "normal human hits", "longsword damage," "leather armor equivalent..." Where this fell apart was trying to square level-based characters with skill-based ones, but I'm interested in other people's attempts to truly live up to Old School completeness.

I guess time will tell if people find this or a similar standard useful. So it's on to other, more directly practical things. I have been struggling with a tricky issue on the dungeon.ppt slide (graph lines: overlay or room fill?) and it will take a while to detail both of my jury-rigged solutions. Bear with me ... it'll be great when it comes out, I promise!
Posted by Roger G-S at 00:11