It's been a while since my last update on the Trossley campaign. I find campaign reports tend to go uncommented and I myself often skim over them in other people's blogs, with a few exceptions. Are play reports kind of like "tell me about your character" for DMs?

Well, they're a good record of the campaign so I'm going to keep posting them. But I am going to spice up proceedings from now on with a kind of "Joesky rule" for my reports, which is to talk at the end about a lesson or idea that emerged from the session, rather than "bla bla bla and then they killed the hobgoblins." It is optional for this lesson to be presented by one of those 1980's moral-delivery characters that child psychologists stuck into cartoons for kids to identify with.

Two sessions have gone by since. The first one had a lot of exploring, with the party finding themselves banned from the Yurog Kobolds stomping grounds because they didn't want to play "The Game" - unlike the "Finger of Fazio," a rival party's mercenary the kobolds took prisoner on that group's ill-fated dungeon run and forced to play along.

Lots of dungeon terrain got mapped and connected up, lots of empty storerooms explored, a troglodyte released who was suffering from strange excisions on the groin, and some in-town bickering and haggling. Oh, and about three more stairs down got discovered. One was a huge spiral stair that led up as well as down. It had the dwarf suffering direction-sense vertigo as they ascended, but they'd been warned about this particular dimension-churning staircase by the veteran explorer Lord Mayor Felmere. What they didn't expect was that the stair was winding into a ceiling of water, with fishes swimming and sunlight dimly shining from above. Prudence dictated descent.

The second session, picked up from where the intact party left off in the dungeon, was an epic two-delve battle against a colony of stirges in a section of the cellars that someone had been trying to mine into. Spirits were tense as Grumpka the dwarf ventured alone time and time again into the low-ceilinged tunnels, drawing out pack after pack of stirges like a daintily-bearded fishing lure. Cordoon the henchman caught a beak that put him out of action, but thanks to good post-traumatic dice rolling was back on his feet in a day, and the party went back, disposed of the stirges, and raked in a motley collection of items, coins, and an intact suit of plate/mail armor. Boniface's attempt to peddle a stirge's beak to the old witch who sells healing potions, though, met with nothing but contempt and antipathy. Charisma won't get you everywhere... 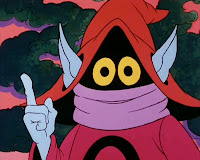 So, Orko, enough telling you about my campaign. Tell me, what have we learned about stirges?
1-15: Normal stirges
16-17: Barbed beaks; do 1 more point of damage when extracted, 1-3 if wound is healed over.
18: Acid stirges, inject caustic bile on first turn of sucking for double damage.
19: "Stirges Blow": deviant stirges inflate instead of draining their victims' blood vessels; save (Death/Fortitude) or suffer a fatal embolism.
20: Tiny Burnett-Swann stirges, fangs not beak, 1-2 hp each, hide and sneak as a 5th level thief, settle on back of neck with a hit, hide there and drain 1 hp/round unless noticed.
Posted by Roger G-S at 23:20