It's easy to throw out those spells in 3.5 that are meant for arcane archers and other fighter-spell user types.

Harder to decide is where the job of the cleric ends and the magic-user begins. As a kind of anti-homage to 4e I want their duties and ways to be more sharply defined from each other, not less. At stake here are a number of "buff" spells such as Protection from Evil (and all the other alignments) but including anything that might benefit another character - Enlarge/Reduce, the variety of minor aquatic environment spells, and so on. 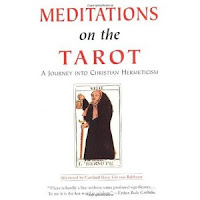 Let me present a perspective on the difference between divine and "arcane" magic I consider enlightening. It's from a book I read back in the 90's when my scholarly pursuits involved a heavy dose of Tarot and hermeticism strictly on the side. The author is an anonymous Russian convert to Catholicism and the book is Meditations on the Tarot.

Fortunately there is a summary of the first few chapters available on the Web so I don't have to dig up my old notes. The relevant chapter is on the Empress; the relevant section about the practice of sacred magic, which corresponds to the miracles of saints and the Bible. This is contrasted with personal magic and sorcery.

In sacred magic, the act has the aim of restoring freedom to others; is carried out through holy means; and has Godhead as its source of power. Other forms of magic deviate from this script at the caster's own spiritual peril, and tend to deny freedom to others, by enslaving their will or harming them. Personal magic in particular has the peril of descending into sorcery, in which the caster becomes the tool of "elemental forces" - demons from the human unconscious, more terrifying than the Devil and his minions because they are not bound by the same rules.

There is so much that is fascinating in the chapter. I am going to have to return to it when considering clerical magic, because that spell list forces a direct confrontation with the ethics of magic and indeed, with the alignment and ethical system reflected in one's game. In the meantime I am going to use it, in spirit rather than literally, to back a separation between the magic-user's personal magic and the sacred magic of the good cleric or the sorcery of the evil wizard. It is possible in my final system - depending on the desire of the setting's controller - to allow magic-users access to some aspects of "white" and "black" magic. After all, a lot of us can't live without skeleton-raising sorcerers and wizards who blast evil with holy names. Right now, though, both spells like "Protection from (alignment)" and necromancy spells are peripheral to the core list.

This also gives a cue as to which helpful spells are in the spirit of personal magic / sorcery and which are more sacred. Certainly, healing is presented by the Meditations' author as a way to restore freedom to another individual, corresponding nicely with the game reasons to restrict it to clerics; direct protection of others from harm is another general way to maintain freedom, and abjuration of hostile effects is a third. It's intriguing, if definitely too radical, to contemplate a world in which only clerics can Dispel Magic ...

The helpful effects of personal, magic-user magic should therefore either apply to the caster's self (Shield, Expeditious Retreat) or ideally, when affecting others, be as potentially problematic as liberating. Magic-user "buffs" should not just be bonuses or added skills but should have profoundly weird effects on the recipient. Examples of good spells for this are Enlarge/Reduce, or my weightlessness spell that combines Jump, Feather Fall and Tenser's. As a side effect ... this tends to encourage creative uses of the spells.

I realize that this all is just an echo of the deep understanding of morality and spirituality within the Empress chapter in the Meditations. Indeed, I think that source deserves to inspire a dedicated magic system top to toe. There is a way to do this within a D&D setting, as I'll show in my cleric writings, but it certainly calls into questions many assumptions in a game of uneasy alliances between sword-and-sorcery treasure seekers, scholarly wizards, holy crusaders from the Middle Ages, and Tolkien nonhumans.
Posted by Roger G-S at 16:25