I have been reading a fairly typical RPGnet thread about a game some of my colleagues design and playtest, with the very simple question. What do you want? 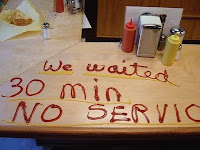 And the answer, at length, to another question: what do you do when a game product doesn't give you what you want?

Well, you can make peace with it, or you can act like one of these three characters.

The customer drops the game for something they enjoy better.

The customizer chooses to stick with the game. Maybe they have an attachment to it, or find it too convenient a language of common experience for fellow players to let go. But they satisfy their complaints by making the game their own; customizing it with add-ons and house rules.

The citizen is often seen on message boards; in fact, I think someone who reads a lot of them is bound to overestimate the frequency of this character. This is someone with such attachment to the product that they act as if its makers are a government that is obliged to listen to the complaints of its citizens. What's more, the typical citizen will claim to speak for the majority of their fellow inmates.

Trapped as if by accident of birth in their imaginary country, often you will hear the citizen-fan swearing to boycott and leave, just as some do when their side loses a bitter election. (Forum moderators call this behavior "flouncing.") They may stop buying products - though even that claim is suspect - but they won't leave the fan community, forming a perpetually dissatisfied government-in-exile.

Sometimes the customizer will ask the citizen why they don't just take matters into their own hands and run the version of the game they like. The answer is usually "I don't have the time" - never mind all the time you have spent on the internet haranguing people to change it for you. Or "I paid good money for this product, it is not my job to fix it." So how long are you going to wait for "Hey, The Company Finally Listened to Me" edition?

Perhaps this is why I find the old school community so refreshing, after going on 8 years in various capacities working on the side for a "government" - a commercial game line with a relatively large and highly identified fanbase. With no company to accuse of profiteering, no official products to fall short of the One True Vision of the game, the customizers of the retro-clone movement simply strike out on their own and share their ideas, triumphs and failures.

Normal, mature behavior, perhaps, but refreshing all the same.
Posted by Roger G-S at 22:01