We spent most of the day with friends playing Avalon Hill's flawed classic from 1977, Source of the Nile. Really unlike any other boardgame, Source comes with a laminated board of central and southern Africa as it appeared to Europeans in the late 19th Century, with only coastal hexes and Cape Colony mapped. The players mount expeditions to explore the interior, filling in blank hexes with randomly generated terrain as they go. The rulebook charmingly talks about playing the game in the spirit of the "new role playing games," and there is a lot of overlap in feel - from the hex-mapping and exploration, to the choice of different professions with different victory priorities and special abilities in play, to the way ridiculous random events can wipe out nearly a whole expedition. In fact, an older version got a glowing review from a key figure in role-playing.

Leaving aside the somewhat chaotic tangle of the rules, which true to 70's form are full of holes, typos and charming special circumstances and mechanics, the game is just too full of fun-killer moments to recommend playing without changing the rules for getting lost and recruiting funds in Europe. Sitting there for half an hour, rolling a die or collecting cards so you can start moving again, is not fun. A computer spreadsheet is also mandatory to handle the complex task of balancing cost and carrying capacity for expedition design. 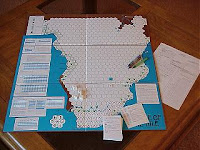 Still, the game play reminded me that there is something glorious about an explorer mapping out huge stretches of the continent, only to die in a random ambush, his discoveries fading into ontological unreality ... or the largest exploring party ever known, financed by the proceeds of five elephant tusks, karmically being scattered to the four winds by a rogue elephant stampede near the mouth of their starting river. There also was a great overland trek where one party, defeated in a fight with natives, was reduced to just the explorer. Trapped behind large lakes and hostile tribes without a canoe, the explorer chanced swamp and desert, putting life in the hands of an uncertain water supply ... and eventually coming out in glory as the first European to cross from the Atlantic to Indian Ocean coasts. Only the very real chance of failure can truly gild success as it deserves.

This is a lesson we may be losing in the gaming hobby at large, with its Nirvana of studiously balanced rules and procedure guaranteeing a constant diet of fun and involvement for everyone. What that design ethic doesn't teach is patience, the ability to fill empty "downtime" with banter, work out the holes in the rules cooperatively, and take hard knocks with a grin. Ah, progress...

I'm not sure why some enterprising game company has not taken it on themselves to produce a less difficult version of Source. The fantasy genre could get rid of any and all sociopolitical objections to the "natives" and "voodoo", and the game idea itself is lots of fun. At the very least, a hex crawl through a jungle continent in a role-playing adventure game could be regulated by frequent consultation of the random events and findings on the cards.
Posted by Roger G-S at 01:01