A huge chunk of the 3.5 spell list is damage spells in every conceivable variety of energy, range and effect. 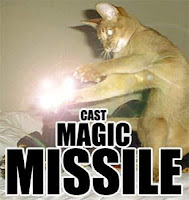 This takes me back to AD&D days. Has anyone ever rolled up Magic Missile in their spellbook and said "Darn, wish I'd gotten Burning Hands instead"? For that matter, what's the point of a low-level damage spell that you have to touch someone for, or one that burninates the henchman protecting you as well as the enemy? Magic Missile is darn near perfect - it cuts through most energy immunities, has a good range, hits automatically in most early editions. A lot of other damage spell ideas are either minor variations on it, or just unsuitable for someone with a 4 sided hit die and no armor.

Be it resolved that the most parsimonious way to treat direct damage spells at early levels is the good old Magic Missile, in one form or another; some way to set things on fire from a distance (fire is fun); and ... perhaps using Animate Rope to strangle? Any other varieties of the blast'em spell, I fear, will only reinforce the idea of the magic-user as arsenal rather than problem solver at low levels.
Posted by Roger G-S at 22:31