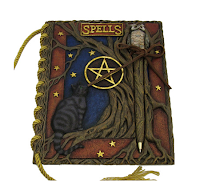 The magic system is probably the thing that's the least to my liking in older editions of D&D. After, all what attracts me to the old school ways is the emphasis on player creativity and problem solving. Then I face the prospect of a spell system that almost seems designed to smother creativity. It's just perverse to force pre-memorization of spells, from a list where one or two each level stand out as clearly optimal in combat, at the same time you are encouraging players to come up with crazy solutions in every other area using ropes, spikes, mules, catnip and what have you.

I actually don't have a beef with Vancian magic. I wish the magic was Vancian. Check out Turjan of Miir. Not for him 3x Sleep, 2x Web, 1x Fireball. After all, if you are physically forcing spells into your head, it's absurd to memorize the same thing twice. So one fix is to slightly up the number of spells - maybe, for instance, first-level casters with a decent prime requisite get two - but make each one be different. That would really enforce creativity and variety.

Or we can go with later-period Vancian (Rhialto the Marvellous, written many years after the first printing of D&D), and assume that magic is done through spirit-world intermediaries of various ranks, which would handily explain the levels system. Any rules, really, can be justified with an image of fractious, bureaucratically minded minions following absurd empyrean regulations. So why not have it be a matter of using spell slots instead of pre-memorizing spells, with free choice at each use? In other words, everyone's a cleric. That allows the odd Comprehend Languages to be pulled out at the right time when it would really save the party's bacon.

I'll mull over those possibilities and maybe take your comments. I don't want to use a spell point system - that just increases the bias toward your most effective spells across levels. But here is the other principle I want to use in spell design.

"It's a tool for brushing your teeth."

"It's a plastic handle about five inches long with a narrow head. On the head are mounted a thick array of plastic bristles."

I think you'll see that the more concrete description opens more room for creativity. Instead of being constrained by the function, the material description invites you to think of all kinds of uses for it - scrubbing small places, melting the handle and using it as a spoon ...

"This spell imparts great force to a pebble-sized object, causing it to streak from one's hand for up to 60 feet. It always hits its target; if the target is alive, it does 1d4 damage to it."

This is what I want in my spell descriptions and designs. Spells that expand role-playing and problem-solving rather than shutting them down. You may think I have some culprit spells in mind and you are right. But that's for another time.
Posted by Roger G-S at 22:15