No room here for pages and pages of listings. Instead, as with monsters and treasures I enlist the Game Master's own discretion and imagination - framing the possibilities, not exhausting them. Just like spell failures in my system can involve the wrong other spell, so magic items are mostly spells in a box, removing the need for separate descriptions.

And most of the need for enhanced items at low levels can be supplied by the "special" non-magical items instead. The starred ones can even be bought in a large enough settlement. This will help overcome "blah, another +1 dagger" blues, and ensure that the really enchanted stuff shines out someway. 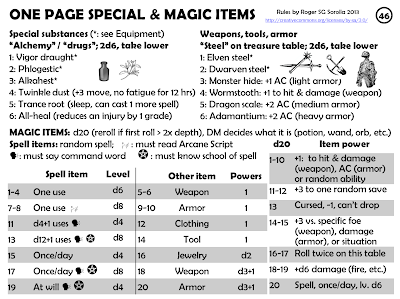 More powerful weapons/armor than +1 are rare (you pretty much need to roll high on a second roll to get them, or get lucky with "roll twice" results.) Again, this will help arrest the climb of the combat game to silly power levels. But every once in a while you will get a weapon that reaches artifact-level powers. Further rules for higher levels will give more possibilities.

Well, now ... this means that except for the play examples, and a few changes I want to make in previous pages (the prophet class and some other things), the 52 Pages is now a complete "basic" system for character levels 1-3! I'll have a viable download of the rules so far up for you tomorrow.