Who Brings New Player Characters? The Plot-Copter Does

The usual way to integrate a new player-character into the party is some "hail fellow well met" cut scene at Ye Olde Tavern. But what happens if the party is on long-range recon and there isn't a tavern for miles?

Well, you can always be hardcore and require them to return to civilization before the new player can start. But that frustrates everyone. 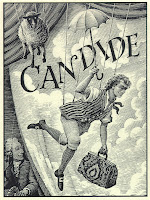 Taking a cue from picaresque literature, I prefer the meeting to be on-site, and covered by the barest fig leaf of plausibility. There's always room in a fantastic universe for the party to meet up with a fellow "solo adventurer" in the ruins, or to encounter a wanderer from even stranger spaces and times who was placed in temporal stasis or thrust through a gate. A strange origin can itself be a plot hook for the new player.

In my campaign there have been three character introductions, none of them in a tavern. For the first, I took the character through a mini-game detailing his travels from south to north, before joining him to a caravan that the party had been hired to guard. For the second, two players had to be introduced, so I had it that the one (hermit) met the other (merchant agent), who had been hired by the party's current employer to follow the party, joining it if necessary, in order to make sure they were carrying out the duty they had been hired to do.

Most recently, a rogue and her wizardly henchwoman were introduced to the party in the middle of a coastal maze of cliffs and rocks. Having been shipwrecked, the new players had been huddling in a cave until the party showed up. Conveniently, this cave was a good parking place for the hermit character to go on a retreat, because her player was going to be away over the summer; another, less common real-world occurrence where an in-game solution needs to be thought up.

Regardless, I always also the new player with words such as "You take an instant liking to her for some reason" or "You all feel you can trust each other and move on." Yes, in reality, these kinds of wilderness meetings would be hedged round with suspicion, and any NPC met under those circumstances would be treated very differently.

But there's no getting around it; the players know that the new player wants to get along and become part of the band. Better to acknowledge that immediately and move on, rather than give the impression that the game is about setting the players against each other. If there's any jarring incongruity about the meeting, it will quickly be forgotten as the players create new memories of fun and adventure together.
Posted by Roger G-S at 08:23