One-Phrase Alignments and the New Prophet

I'll say it again: healing characters are important. My current campaign party is having the cleric ("prophet" in 52 Pages) sit out for the summer, and boy are they scared. Potions compensate somewhat, but especially on long expeditions, there's nothing like renewable healing.

From 4th Edition, Wizards' D&D has seen this as a problem and compensated with all sorts of innate healing surges and the like. For me, it's an opportunity to take a light hand in the design of the character class, because healers are so damn good anyway.

The new 52 Pages lets a prophet, on average, not quite heal up one fighter a day. Turning, Flame Princess style, will become a spell, and the miracles will also be on spell cards. This lets me, and the DM, come up with different religions having different spells and sacred weapons, folding the Druid option into "brown magic." That's the tree on the page; the cup is restoration magic, and the sun is abjuration, while the star is the wizard's divination school. Spell cards will come later. 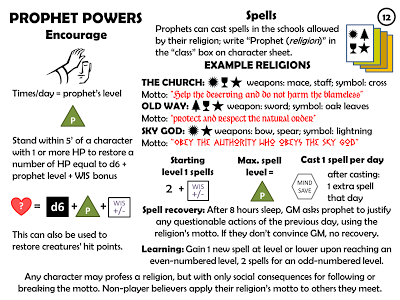 The main question is whether to go with a variant of the current miracle system (shown here), where you get one guaranteed spell per day and you can keep on casting as long as you make Mind saves, or more of a standard wizard-like spell pack-out. Prophets should have fewer of these spells than wizards, so having worked out the numbers, they should probably gain +1 Mind save every level instead of every other level, giving them on average 1.4 "miracle" spells as day at 1st (with a +1 Wisdom bonus) and 3.3 at 9th. I might also let them repeat spells, unlike wizards.

Finally, the diversity of available religions has given me a neat idea: to reduce alignment to a motto. The beauty of this is that it becomes a negotiation between player and GM, where the meaning of such words as "deserving" and "protect" can be twisted in justification of the deeds of the day. Pretty much any motto you can think of will allow for shades of religious interpretation, which is how I like it.
Posted by Roger G-S at 08:57