I've been playing the browser game Four Scepters. Like Grow RPG, it's a puzzle game disguised as a fantasy adventure, but with an unusual twist. Instead of sending in the four party members together, they must go in the dungeon one after another, one stepping in when the other one dies. 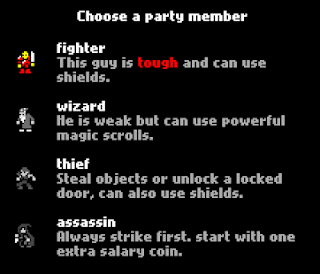 This neat scenario had me thinking how to make the premise work as a tabletop trick to spring on the players - making them send in the fighter for some monsters, the wizard for others, the thief to spring traps, and so forth. Of course, some contrived gauntlet of one-person teleporters, amulets, and so forth could simulate the exact play of the game. But what about ... this solution?
A granite statue of a human-sized helmeted figure, of ambiguous gender and race, stands on a carnelian pedestal. When anyone touches the pedestal, the statue emits a blinding radiance, and all persons in the room are amalgamated into the statue, which then comes alive. Any equipment or items are left in the room.

The composite statue has the combined hit points of all its inhabitants. In order for it to act, all must agree to let one personality dominate as the "caller" - at which point the statue takes on the caller's abilities. The statue has a natural armor class as partial plate mail, and can use held items and weapons appropriate to the caller's class.

How can the players get back in their bodies? Well, that might be a matter of reaching a goal buried deeper in the dungeon - of one of the players reaching a new experience level (experience points are divided up as normal) - or most deviously, by letting the statue die.