I know I've been harsh on them before, and their treatment in 90's D&D can stir suspicions of April Foolery.  But damned if last week one of my players didn't want to play a harmonica-toting bard. Thus, this class for the 52 Pages rules: 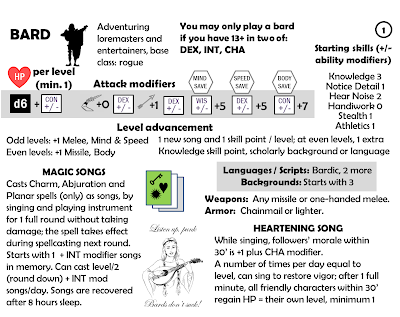 The original idea for the AD&D bard was a kind of multi-classed jack of all trades, and as you can see I've kept that approach. With "character hit points as morale" it makes sense to give the bard a wide-beam "healing" power that complements the prophet's. Magic spells, like the healing, are slow; the bard works best between or before combats. Add to this a halfway decent fighting statline, with chain armor and missile weapons, and you have a class in the same range as the elf but with a much different feel. I've also kept a little bit of the "bard as hireling" idea, in that the healing depends on the level of the target as well as the bard.
Posted by Roger G-S at 19:55