Making a Mark on the Map

Players love their character sheets, the filling in, gearing up, gaining levels and skills and goodies. They also love maps, filling in the blank spaces of the unknown. But what if the map of a realm - like character sheets - also told a story of their gaining power, influence, and notoriety in the world?

Below is a fairly simple way to mark up the icons for cities, towns or strongholds on a map, that records what kind of legacy an adventuring party is leaving there. Here are the icons that can be written around the place's symbol on the map (shown here by a square): 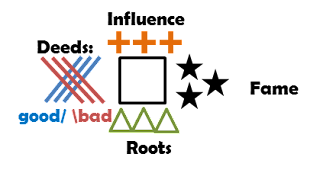 Influence: This is the sway of the party with the powerful folk of the place.
Fame: This is how widely known the party is in the place, by name and appearance.
Roots: This is their lasting connection with the place.
Deeds: There can be up to three backward slashes representing deeds that are "bad" to the interests of the settlement or stronghold, which might actually be morally good, and up to three forward slashes representing deeds that are "good" to their interests. These deeds may or may not correspond to the party's Fame at large, but they should be known to someone. Some deeds may be controversial, earning both kinds of slashes according to whose interests they serve and undermine.
I suspect that leaving their mark on the map of the world in this way can be so appealing to players that they would go out of their way to earn such "achievements," pulling outrageous stunts and displays, buying real estate, yanking the strings in court. And if  the game gets to the point of settling down and establishing a domain, it's very useful to see at a glance where your friends, roots, and enemies are.

Next post: An example from actual play.
Posted by Roger G-S at 23:36