For four months or so, John Turcotte's AD&D 1st edition module "Red Tam's Bones" (available for free here) has been the loose and often-violated framework for the adventures of my main party in and around the lands of Faerie, which in my world extradimensionally straddle the border between the Inviolacy (think Papal States) and the elven kingdoms. So, the main plot seemed ideal - a cranky Abbot underwrites two expeditions into Faerie lands to find the bones, and later the musical instrument, of the bard Red Tam. A few spoilers follow. 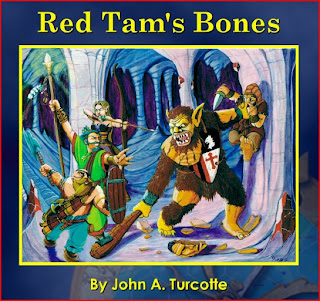 All the same, my initial impression of it was negative. Indeed, we are in the world of the wistful and fanciful fey, but it never helps to have the exposition written out in some sort of Anglo-Celtic-Groundskeeper Willie dialect, with smirking asides so coy that like the Eric Idle "nudge nudge" character, it's not entirely clear what exactly is being intimated.

Let us banish boxed text to the training modules, where it will exist only to teach beginning gamesmasters how to turn third-person prose into second-person immersion on the fly - never, ever as a permanent crutch. And above the ruins of its dwelling let us erect this motto from today, from a dude who gets it:

... the intention is not to describe things directly but to put them inside the head of the DM who will then describe them to other people. You are not making a normal form of art, you are making a virus. It is not to be looked at, it is to infect people, go inside them and then they do actions round a game table with other people- Patrick Stuart

Anyway, once past this barrier, you are in the first part of the adventure, where the party is trying to get the titular bones in a wild goose chase across three outdoor locations separated by encounter rolls in various terrains. There is a path suggested, but it's not a railroad; the players may follow rumors in a different order or (as mine did) subvert the mission entirely. This may cause less confident DMs anxiety, but it was perfectly fine with me. The locations are very atmospheric and folkloric, with challenges going beyond simple-minded combat or riddle-me-ree; my party actually approached one of these spots, the faerie mounds, in their later outdoor travels, but thought better of investigating.

The second part turned out to be really wonderful. The goose chase this time targets Red Tam's rebec (a primitive viola) and the evil faerie lover who drained his soul and gave the rebec to her latest paramour, Diarmuid. Her place, the Vernal House, is a sprawling mansion in ornate decay, stuffed to the gills with strange curios, eccentric residents, and treasure if you can get it. My party cut more or less to the chase, which is easy to do if you ask around, and only sampled a few of the wonders available: the three bird-men in the cottage, Diarmuid's horse, the art gallery on the second floor with a painting that clones one of your characters to create a memorable villain.

I appreciated the different denizens - and one of the most important in my run was a random encounter with a spriggan whom I named Goatgamble. These characters can be set into motion like billiard balls, interacting with the weird environment. Goatgamble reaction-rolled his way into love with an elven henchwoman and craftily led the party to the gallery painting so he could have his own evil clone of her.

If you were to use the Vernal House, it might work better as a one-shot with no set goal or only vague rumors, rather than follow the rebec-stealing plot. Give your adventurers only one shot at its riches - it wouldn't do to have them just clear it out room by room like some dirty dungeon.
Posted by Roger G-S at 00:26