Running Bandits Across the Many Worlds

Well, I couldn't get much enthusiasm to blog during my trip in the latter half of January (especially when my computer's hard disk crashed) but did get in a fair amount of tabletop action. Stick with it, there's some more commentary on megadungeon design below ...

My first stop was the gaming in-laws (previously) where my wife rolled up her third first level magic-user with a Sleep spell to venture into the Castle of the Mad Archmage - promptly dubbed "Repetitia." Thus augmented, the usual family party set out to defeat the Skull Stacker bandits in the upper works, led by the green-armored terror, half-orc Grunya (or Grainne - medieval orthography being what it is). This would be the third time the Skull Stackers have appeared in my various parallel universes - the first time in the long-ago Trossley campaign, the second in the Saturday games I ran last year for the local game club. 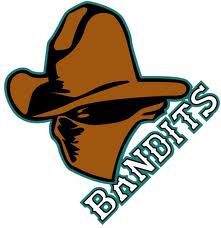 Accompanying the party was a detachment of the local guard, pushing ahead of them three convicts from the rival bandit gang captured in the previous session. The convicts were chained to polearms and told that their way to mercy was to attack without regard for life.

There followed a tense battle across a curtain wall and tower with scaling of walls, dodging and not-dodging of arrows, opening of one door from within and another door using Repetitia's enlarge/reduce spell on the planks. Dad and daughter climbed a grappling rope to find Grunya and comrades atop the tower while son and the rest of the party battled up from within the tower, landing a critical hit on the leader at the best possible moment to knock her down the stairs. Soon she was dead and the young version of the rival bandit Fergus, who had appeared in Grunya's respawned band when the Castle reappeared, was in custody. Shades of Looper! The captive older version of Fergus offered his own life to hang for the crimes of both if younger Fergus could be indentured to the party as a man-at-arms - very different from how this dilemma played out in Trossley.

The next day, the party, now mostly second level, decided to return to the Castle's dungeons and head down the rightmost of three stairs to level 2. After disposing of a spider they found themselves in a hallway occupied by ... not bandits ... okay, brigands. A quick sleep spell disposed of most of the band and in short order they were negotiating surrender terms with the leader, Tov Encher. Tov convinced them that only he could pacify the neighboring troglodytes who had come to investigate the sounds they heard, and so got them out of the level, and set himself free at the price of the gang's treasure.

It's only after running the brigand episode that I realized this was another example of Joe Bloch's hidden depths beneath the Castle's terse descriptions. (I've previously noticed some subtle setups running the west end of the second level, where a seemingly unbeatable monster has the means to defeat at hand, and a fear trap combines with branching corridors behind it, to effectively split the party.)

The group of about 12 brigands lives in a series of 20x20 foot rooms off a straight hallway behind a door, close to the stairway down. To quote:

BLACK SPEAR GANG (#35 – 40). A group of brigands has taken up residence with the idea of ambushing adventurers after they are weakened. They have not been very successful of late, and will often send out patrols to look for likely targets, setting up ambushes, etc.

This is where it pays to read ahead of time and embellish the dungeon. My one idea was that they would try to dissuade adventurers from entering their area, instead shunting them to the nearby troglodyte-controlled corridor, which would easily yield a weakened party for the ambush idea. Therefore, I had the brigands put the delver's rune for "Treasure" on their own door, which obviously (?) would make parties suspicious and choose the other door. However, nobody in the party managed to decipher the rune, so in they went.

The fallback plan for the brigands, in hindsight, would be to put bars or blockades on the inside of the doors, hope the party would bypass the unmovable doors to venture deeper within, and then ambush on return. But DMs, like players, have to live and learn.

Personally, I think working with the design of the dungeon to bring out strategies like this is a fun challenge. But I can see how a product for less experienced session runners might gain value by going beyond the minimal descriptions, and spelling out some of the more interesting possibilities that might not be immediately obvious.