Moving on in the 52 Pages project, this is the first page after the character creation section. The basic points of the game have already been explained. Now it's time to be a little bit directive toward the DM and propose a tried and tested training-wheels approach to the campaign for levels 1-3. Amazingly, the isometric graphics are all public domain, from clker.com. 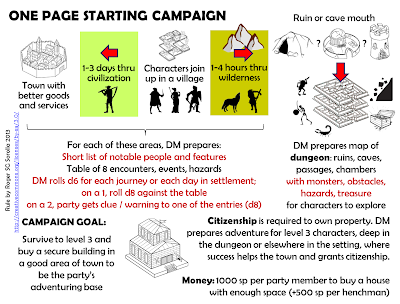 I think there's still a lot of room for DM creativity within this framework, but probably the most disagreement will be had about the campaign goal. My reasoning is:
This last advantage, of course, is also a disadvantage to some. Many players see heroic adventurers as rootless by nature, chafing at any kind of ties to the land. They'd rather put their wealth into a pouch full of gems than real estate.

Which brings me to the final reason of all. It's foolish to pretend, when inventing the by now twenty-dozenth variation on D&D, that this is the Muad'Dib of heartbreakers that will sweep all before it and forge a new world order of roleplaying. No, the best you can hope for is that people will dabble with the system and swipe some of your best ideas. With that in mind I've tried to make it easy to carve the 52 Pages at the joints. Another logical progression from that idea is that, when choosing between generic and distinctive - go distinctive. You may be wrong, but you are doing something nobody else is doing, and diversifying the DNA of this much mutated game.
Posted by Roger G-S at 20:41