The B Team Can Relieve Your Campaign

A couple of recent gaming developments have made me really appreciate the practice of keeping up more than one set of characters in any long-term gaming group.

Part of my recent travels involved returning to the Cafe 28 on New York's 5th Avenue where some of the Red Box NYC games take place. Investigating, I found that a Glantri game was taking place the night before I took off back home, so I showed up to a table packed full of Erics (no, seriously, there were 4 Erics out of 7 guys at table).

One of these Erics was blogger "the Mule," who'd been present at my previous foray, and another was the GM. He ran a B/X game mostly by rules as written with some nice touches - no duplicate spell memorizing, declaring only spells and withdrawal from combat before the initiative roll. The players had maps of Eric's megadungeon from three years of continuous play, spanning five levels and hundreds of rooms. This "Chateau D'Amberville" is based on Castle Amber in the sense that The Lord of the Rings is based on the Elder Edda. It was truly a great glimpse into the potential of the format. 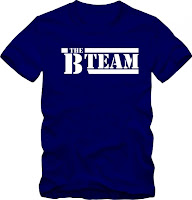 As it turned out, my newly rolled wizard character - Raz, son of Taz - was adventuring that evening with a B-list party consisting of players' secondary characters, mostly level 5 and 6. This explained the nonchalance when two of them got double-level drained, in merciless old school style, by some unexpected spectres, which we quickly fled from. I admired the good spirits of these players, who were evidently playing in a very free-wheeling table with drop-in party composition and multiple characters.

On returning home I unleashed the lead-in to an episode I'd been brooding over all January - a climax adventure that could take place in one session, and would cap off the plot of the "Faerie war" arc they'd been following since the summer. Today I learned the limits of plot-heavy climax adventures ... when one of the players called in sick and we realized that we just couldn't play on in this adventure without her.

So we decided to form a B-Team with the existing group, rolling up new characters and embarking ad-hoc on an adventure. The A team (Band of Iron) had started in the Valley of Milk and Cheese where I had also placed Jeff Sparks' Labyrinth Lord adventure Wheel of Evil, purchased but never engaged with, an appropriately cheese-themed adventure. And so, the new group started in the uneasy town of Renneton, got a good way into the cheese caves, and everyone seemed to enjoy the change of perspective and freedom from the burdensome importance of actions in the by now year-long main campaign.

Perhaps this is what most campaigns need past a certain point - a way to deal with missing or guest players, to blow off steam, and get the kind of fast-and-loose play that comes with an adventure rather than story focus.
Posted by Roger G-S at 00:44