As the blogosphere faces the possibility that all we'll have of Dwimmermount is a draft, critical evaluations of that draft are flooding in, from the dismissive to the constructive. One big part of the criticism - really just an extension of last summer's "9 rats, 2000 cp" beef -  is that the upper level maps are boring.

There's a reason for that, very much in keeping with the Phase 1 of the OSR that Dwimmermount represents. Phase 1 was all about copying the old stuff, with a "D&D is always right" mentality. Take a look at this paparazzi shot of Gary Gygax's Castle Greyhawk dungeon Level 1: 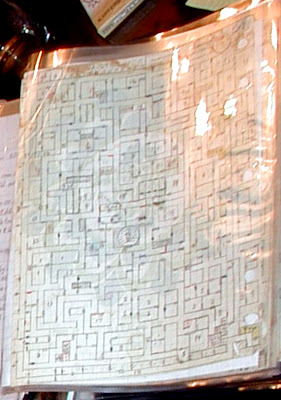 It's a hot mess of jammed-together, samey rooms and corridors, and from all accounts the keying was minimal. I'd rather explore even the upper levels of Joe Bloch's Castle of the Mad Archmage than this map - even though the Castle is another case of a Gygax homage intentionally putting the more generic stuff up top and the wilder level designs below. (Besides, the Castle has hidden depths to its design not evident from casual skimming - as I hope to demonstrate next post.)

But from experience of actual play, consider what this design approach means. Most explorers of megadungeons never get past the early levels - just as most campaigns never reach level 10. This means that most people's megadungeon experience is intentionally boring, with the real fun deferred for a lower level that never comes.

Phase 2 of the OSR means that enjoyment and amazement take precedence over carbon-copying the old school. The goal is not to reproduce the means, but the ends, of the class of 1974 - the sense of wonder and discovery now hard to recover from a set of expectations turned cliche.

This means that megadungeons should engage from the beginning, with early levels that reward exploration with variety - not the most awesome and dazzling stuff, certainly, but fun mapping, meaningful phenomena, intriguing hints that draw explorers deeper. I've tried to follow this principle with my first-level completion for the Castle - which I'm more and more inclined to release as-is this month - and with my new mega-project, one section of which is finished.
Posted by Roger G-S at 12:53