Last night the players met the Three Fine Gentlemen, who in the Dragonsfoot module "Red Tam's Bones" are set to bedevil the players as they go about the quest of recovering the bones for the good of the Holy Church and the erotically haunted Duke's daughter. 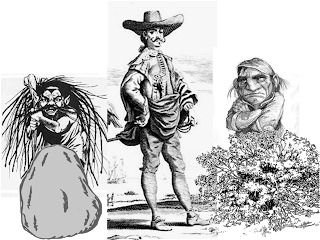 In the course of conversing with these foes, my players realized they liked them and the roguish, departed Tam better than they did the sourpusses of the Church and State, their ostensible employers. Avoiding a donnybrook, they still got experience from the encounter, and a new tip - perhaps the spirit of Red Tam could be found elsewhere, placated by other means?

So off the railroad and on to  the Faerie Road to a certain Market, from where it should be possible to find the Winter Court wherein Red Tam's spirit might be found ...

Oh YEAH. The thing about D&D is that, over nearly 40 years of this game, there is an insane amount of material that is more or less compatible with whatever version you're playing. Need a Faerie Court? There's Ravenloft stuff and 3rd edition stuff  and even a tasty-looking module from the renowned Wolfgang Baur which comes wrapped in a 4th edition crust ...

Well, despite the wrong turn in later editions, D&D's basic simplicity makes it ideal for improvised, free-running campaigns like the one I run. And sure, there are plenty of other simple systems. But what I appreciate about D&D is the ready availability of material - to be modified and hacked and hijacked to be sure, like my players hijacked "Red Tam's Bones," but that's part of the fun, and having the D&D corpus at my beck and call means I only have to put in a fraction of the work.
Posted by Roger G-S at 11:38