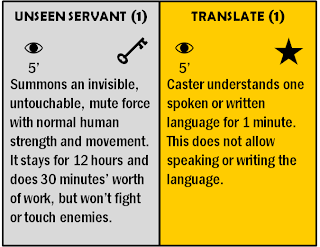 Unseen Servant is one of those spells that's like a Rorschach test, or perhaps a red cape, for the DM and game designer. Eventually players who get this spell are going to want to push it - doubly so if you're using a rules-light system like my "all on one card" mandate for spells. They'll want to know whether they can send the servant ahead to scout, what it can see or hear, how it can communicate with you ("tap once for a humanoid, twice for an arthropod"), whether it can spread flaming oil or run through flaming oil or crouch behind an enemy so you can knock it down with Three Stooges footstool-jutsu.

One approach is to write out more and more rules to cover every possible angle. Truly the task of Sisyphus, because you can never cover every possible angle ("DM, is my unseen servant as 'fully functional' as Lt. Data?") Going down that path, you end up with a binding document of indeterminate length that you are obliged to consult and that still doesn't cover players' full creativity.

But think about the effect that has on the players. In Indianapolis, there is a nightclub where posted signs forbid the wearing of gang insignia, athletic wear or "jorts" (jean shorts). Does that sign make you feel safer, knowing that gang bangers and casually dressed ruffians are denied entry? Or does it serve the same purpose as the two-page legalese spell description - typecasting the patrons of your establishment as hooligans to be legislated against, daring them to find the loopholes?

Now consider the other approach. You're a live referee, not a dead tree rulebook - make the most of it. Inspirit the world. The few short lines on the card are what the player-wizard knows about the inscrutable contracts binding the Unseen Servant to its master. Much is left uncertain, and the servants have a reputation for arbitrary pettifoggery. For this purpose only they are allowed to form sounds in your inner ear. They belong to one of six different extraplanar labor unions, each of which forged a slightly different agreement, and the clauses in the contracts are constantly changing.

This gives you license to make things up as you go along, to balance the game as you go along, to correct mistakes where you give the players too much or too little. Using the servant for scouting ahead? Sure, but ... he will only answer, by tapping, three yes or no questions about what he's seen. It's not the DM making things up. It's not the rules document trying to nail them down.  No, the unseen servant has a mind of its own, and only the most ill-tempered player would question the DM's puppetry.

As for Translate ... it is what you make of it. Knowing an inscription in a long-dead language or whatever the rhino people are saying amongst themselves can be the difference between life or death.
Posted by Roger G-S at 14:41