In Search of the Universal Visual Language

Players of the "Eurogame" type of board game may have noticed that often the cards, board and everything else but the rulebook are produced with a language-free iconography. This reduces the production costs for the international market, because only the rulebook needs to be translated.

But can these glyphs be deciphered without reading the rulebook in your native tongue? Getting this across successfully depends on communicating either in icons (pictures with a one-to-one, analog correspondence to the thing being described) or in universally accepted symbols (pictures understood to stand for a concept without depicting it literally.)

Sometimes this is easy: 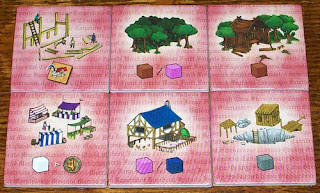 From these tiles in the game Caylus, you can see that they either produce a resource cube of that color, give you a choice of two resource cubes, let you trade the resource cube for 4 cash (white here meaning any color), or build you another game element (at top left).

Sometimes, as I've pointed out before, this is hard: 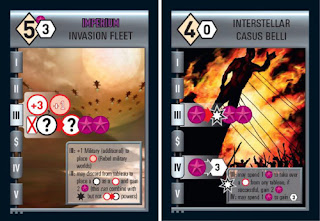 The clear sign that the Race for the Galaxy designers have lost the plot by this expansion - if not before - is their need to explain the iconography in tiny text below. So do you have icons with illegible text on a see-through background, or do you have text with clumsy big uninterpretable icons? Hey, why not both.

I've been mulling over these issues because of a French-language blog that recently linked to me with praise for my old one-page graphic on breakage. While I was glad of that, it made me think that part of the appeal was the language-free simplicity of that graphic. Most of my One Page graphics since then have had a lot of words on them, getting away from the original inspirations by Telecanter that he has produced more or less word-free.

While it's easy to express graphically "5 or more points of damage breaks this," it's hard to put into pictures: "He heals one disease and, unless he makes a Mind save, may not use another miracle that day." Things that are hard to express are those that need symbols rather than icons. A few symbols like the arrow of sequence or causality, or the red X of negation, can be used in limited senses. But how do you express choices or conditional statements? With a flowchart? Even negation is often ambiguous. if you have a red X over a sword does it mean you can't attack, can't attack with bladed weapons, with swords in particular - or you can't be attacked with all those possibilities? Or can't carry a sword?

I use the One Page format to keep rules to a basic level of simplicity. Would No Words be even simpler? Could you even code D&D that way, let alone my fancy house rule D&D with all the subsystems?

In any case, I'll be looking back as I review my One Page rules to see if any bits of text can go. And next time I'll show my attempt at a No Words version of the chase rule from the previous post.
Posted by Roger G-S at 12:22