The first great idea, of course, is James Raggi's Lamentations encumbrance: heavy items are written in a separate list, and encumbrance can just be figured out as the count of that list. By "heavy" I take it to mean objects longer than about two feet, or heavier than 4-5 pounds or so.

The second, which you might not have seen, is Rotten Pulp's visually interesting location-based encumbrance, by Matt Rundle and Jack Mcnamee. Their logic is solid: in fiction, adventuring characters never think about their total load like eighteen-wheelers at a weighing station. Instead, the drama revolves around backpacks, sacks and belts; individual carrying items that can be pilfered, damaged, or dropped in a hurry.

Realistically, too, so much of packing depends on a good distribution around the body. If you pile too much onto your back or your hips, you're not going to move as effectively as if you've packed in a more even way. So shouldn't it make sense that it's the location rather than the whole body that can get overloaded? 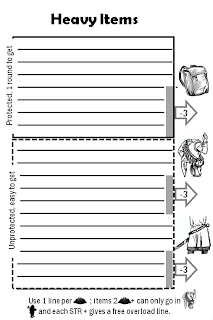 Here's what I came up with as a combination of the two ideas. You have a list divided into three sites: backpack, torso harness, and waist belt. Half of the lines in each list are "overload"; any item placed on them will reduce your move by 3. Dwarves and strong people get free items. Bad things can happen to items outside the backpack - they'll have a chance to break on body criticals or if you fall down, and can be pickpocketed - but things inside the backpack need a full combat round to retrieve.

Armor worn can be thought of as an extra area, with leather being part of the free zone, chain giving -3 and plate giving -6.

Smaller and lighter items are non-encumbering, but it makes sense to also have separate areas for backpack, pouches and purses that are handier to get to, and items secreted on the person, in blouses, boots and so on (these take a round to get out as well.)

Loads should be listed out assuming the character is carrying nothing in the hands. If carrying a shield or weapon makes a difference, this should be noted. If not carrying any useful tool or weapon, the hands can also be used as an extra space that can carry up to 4 weights without losing movement, or 8 weights with an additional -3 move.

(Incidentally, I changed "Encumbrance" to "Heavy Items" as the title for the list and system - it's more understandable to normal folk and leaves behind the baggage, so to speak, of old encumbrance systems detailed down to the copper piece.)