Scrap Princess made some rules for a cool thing that almost no rulesets cover: smaller creatures climbing on larger ones to attack them. Like this. 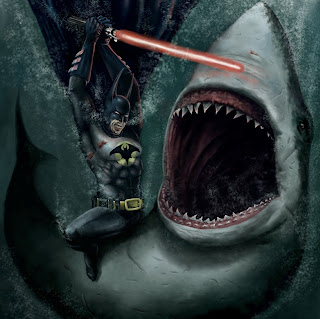 Zak simplified the rule down, getting it more in line with the D&D chassis. I mean, Scrap's idea of damage reduction if you can only attack something's legs makes sense, but that's really changing the D&D rules rather than adding on. The one thing I'd like to keep, though, is using multiple climbs to get a really good advantage on a much bigger enemy.

Then I realized that climbing-on fits perfectly with the One Page brawling system. Once you get into brawling range - effectively giving up your initiative to do so - you can take down or pin your opponent if you're about the same size, pick it up and throw it if you're bigger, and now ... climb on it if you're smaller. The "shaking off" rules even use the same system as the throwing rules. Adding the climb-on stuff also helped me find the will to clean up and simplify the rest of the system from its previous version. 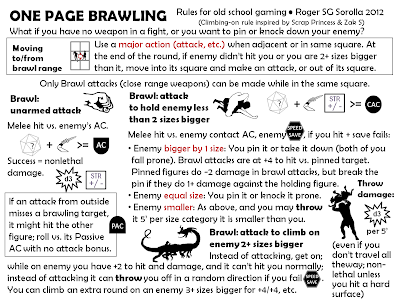 Here I'm assuming for simplicity's sake that a climber either finds a place it can't be attacked from, or that the big creature prefers to use its attack to try and scrape off the climbing creature rather than injure itself.

This has the potential to turn the tables considerably, especially for high-dexterity types. Think of it as a kind of continuous backstabbing, but with some amount of risk involved. Just remember, if vermin with some kind of climbing ability are allowed to get on you - and it's in character for giant spiders and centipedes, who'd probably get frustrated trying to bite boot leather - they become a lot nastier, too.
Posted by Roger G-S at 13:55