I know it's bad enough to play a dice game where players are encouraged to bring their own dice to the table. I know this because I was having a conversation with the ghost of legendary bluesman Slippery Okra Van Buren and when I told him he just shook his head and offered to hold on to my wallet for safe keeping.

I know it's worse when players then get possessive about their dice and develop all kinds of rituals and superstitions. I have some news for you. Your "super special lucky die" is actually a loaded die due to inevitable manufacturing defects. You are not blessed by Gary Gygax's ghost, you are cheating at roleplaying. In fact, sometimes I think the "sometimes roll high, sometimes roll low" mechanics of yore are a blessing in disguise because they route around dice bias.

But hey, I try not to get bent out of shape about it. And then along comes the character who bought these dice that only Abdul Alhazred can read from across the table. 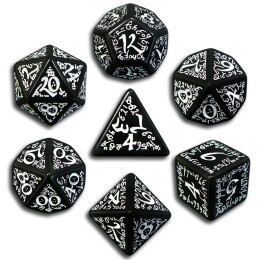 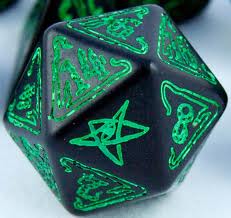 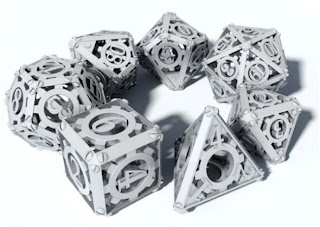 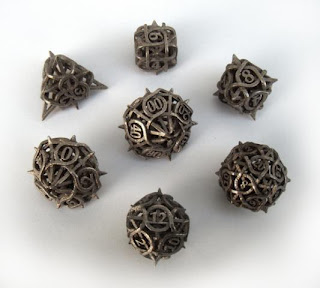 OK, so those last couple of 3D printed ones look cool. But leave them in the display case, wouldya? You're not doing yourself any favors, either; your most lightweight side is the 1 and that's going to constantly roll to the top. And everyone else, it's bad enough you bring your own dice but now I have to trust you to read them off from their 6 inch legibility range? And don't you know that special symbol is robbing your natural 20 of its game-galvanizing power, as everyone sits there going "Uh ... is that a 1 or a 20? Oh, a 20. Uh... cool."

Your dice can be pretty ... but first and foremost they're tools of the game. And everyone else at the table gots to be able to read them.
Posted by Roger G-S at 12:30