So, thanks for all your input. It was clear that the graphics-only version of the chase rules wasn't cutting it, so I've gone back to the text plus graphics style of One Page. 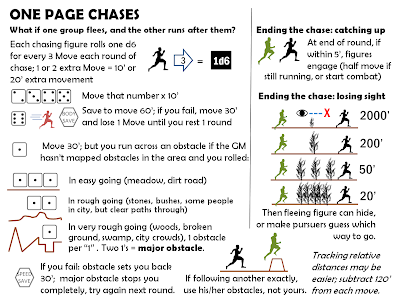 This is just more economical of space; for example, rather than rest the interpretation of difficulty of terrain on a squiggly brown line, or actually put in graphics representing all different kinds of terrain that could be difficult, I let a line of words do it for me.

Even so, the One Page format forces simplicity on the rules. So, instead of the "roll to lose sight" in the text incarnation, now it's just a flat number - the randomness and excitement come from the chase procedure itself.

An extended ruleset would cover things like tracking and listening after losing sight, but an aware enough GM can handle that kind of thing ... right?
Posted by Roger G-S at 11:02

Email ThisBlogThis!Share to TwitterShare to FacebookShare to Pinterest
Labels: chases, one page rules