Now, the most interesting adventures tend to layer one of these content ideas over another, either in space (the fire demons tunneled up under the dwarven fortress) or in time (the fire demons inhabit what used to be the dwarven fortress).
Here' s a template for a dynamic encounter table, eventually one per genre, with at least 4 ways of using it:

1. Roll d2 for column (the 2 wide ones) and d20 for row, for 40 straight-up features, hazards, treasures and encounters from a single genre.
2. Roll d20 and read straight across the table for a canned encounter in a single genre.
3. At the interface between two genres, roll d20 on the main left column of one table, d20 on the main right of the other, and pick the verb that goes with the right hand column (or with the left if that makes more sense; the verbs will be the same on every table). You end up with something like "troglodyte workers PRODUCING scrap metal from the ruins."
4. When one genre occupies the ruins of another, do the same as 3, but only accept italic responses to represent the "dormant" genre. You may have to do this a couple of times; alternatively, or if you have to reroll more than once, show the corpses or abandoned works of the dormant creatures instead of the real deal. 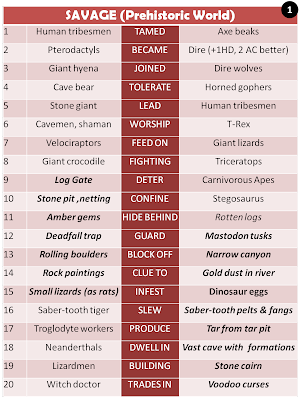