The Bard as Hireling

So ... if all a bard character does is strengthen your morale and make you feel at home in the wilderness and know lots of semi-useful trivia, maybe you're better off having a bard as a retainer instead of playing one? 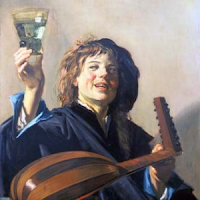 Think of the precedent. African kings with their praise singers ... Brave Sir Robin's bard. Xena's sidekick Gabrielle was a bard, and it's hard to think of the roles being reversed, isn't it?

The bard, then, can be seen as a luxurious accessory for a pretty accomplished party of adventurers. Wages for a bard are a base 100$ (gp) a month, with an additional 50$ for each bonus point the bard's Charisma and Intelligence scores give. What do you get for all this? Well ...
Mere musicians can also be had for 50$ a month, with none of the "sage" or "morale" abilities, and thus no bonus for exceptional scores. Musicians, however, often show poor morale when heading into danger (2d6 morale score 1d6+1) whereas bards are more inquisitive and made of sterner stuff (morale score 2d4+2).
Posted by Roger G-S at 23:14