Resonant Meaning in the Fantastic

Let's get back to the jewelled mosaic of perfect little scenes of wonder and fascination that I last examined as a replacement for the naturalistic churn of monster races and by-the-book magic in D&D. 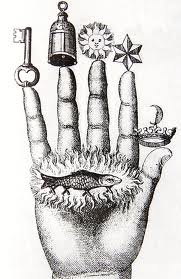 The problem with that mosaic is that without some underlying sequence  to it, it eventually grows meaningless and dull. The cure for that, then, is to arrange the tiles in some sort of scheme that has resonant meaning.

1. The Initiatory Progression. This is the hidden thread connecting the "levels" of the standard adventure dungeon. The rootless monsters, pointless tricks and riddles, sadistic deceptions, and weird environments have out-of-frame meaning as initiatory challenges to the followers of the Dungeon Mystery Religion. As the players progress, the challenges become harder and more varied, and they acquire level titles and cultic secrets like good Mithraists or Freemasons. It's this lurking text that explains why even the most random gonzo collection of levels exerts a narrative pull. But imagine the flow of meaning that opens up when some of the other techniques are layered onto it ...
2. Mock-Naturalism. A naturalistic initiatory progression behaves like a film noir; with progress comes revelation of the hidden web of corruption, the material ironmongery underneath the noble ideals. Mock-naturalism, though, commodifies the intangible in a whimsical and mysterious way, without reducing it to solid matter. The goblins steal dreams from sleeping children, which they then weave into pixie-nets and sell to the muffled merchants from Mars. Demons traffic in soul coins. What this is not, though, is demystification. If the magic sun gems are really radioactive rocks, we leave the fantastic entirely.
3. Power Struggles. Trade and production can coexist in the fantastic with the other common structure of the naturalistic world: struggle. A war between day and night, between heaven and hell, between mountain and sea has the potential to fix in place all manner of combatants, neutrals, vacillators, turncoats. Each side has its own style and esthetics, and there need not be only two. The discovery of these hidden powers is itself an initiation.

4. System of the Cosmos. An expedition to the southern polar land reveals unthought-of abysses of history that conclusively dethrone man as lord of the earth. The initiatory path reveals the mystic meanings of the ten numerals, tracing the zigzag path of creation back from World to Essence. The sins, the planets, the spectral colors all reveal a comforting and powerful structure to the universe. And the horror genre reveals instead a system that is malevolent or wholly uncaring. The goal of this knowledge can be power, godhood, immortality, the salvation of the earth, or merely to know the truth, which is reason enough for many.

I strongly believe that looking back in a few years' time, the prize for the best mega-dungeon, super-campaign or whatever will go to the experience that weaves the most of these elements of meaning into itself.
Posted by Roger G-S at 23:43