Slouching Towards the Slugfest

There's a process I've observed over my years playing and designing for the Legend of the Five Rings (L5R) collectible card game, and that recently came to mind as I read what Randall had to say about overpowered spells in D&D.

Some background: The designers of L5R:CCG made a very simulation-based game back in 1995, much more detailed than the original CCG, Magic:The Gathering. The characters you brought out in this Kurosawa-meets-Tolkien world could attach troops and items, go to court, fight in duels, choose the terrain for their battles, cast spells - even commit seppuku if necessary. 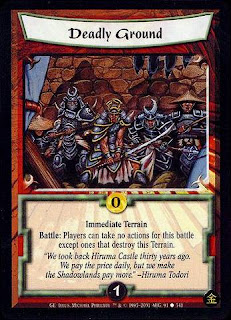 One very visible source of strategic thinking for this game was Sun Tzu. Battles were winner-takes-all, with the loser destroyed, so assurance of overwhelming odds was necessary, and attacking always risky. It was possible to take back-and-forth actions to try to whittle down the enemy forces or temporarily disable them, but terrains could shut down battles or annul them entirely. What's more, there was a range of intrigues, assassins, duels, and courtiers that could put enemy leaders and troops out of commission before the battle.

This state of affairs resembles a certain type of old-school roleplaying game where combat is potentially lethal; where cheesy, if naturalistic, tricks abound. Flaming oil, sleep spells and war dogs were the players' weapons against save-or-die poisons, meager hit dice, and death at zero hit points. Under such conditions any advantage was acceptable to seek.

In both games, as time passed, designers responded to player concerns by making the combat more back-and-forth, less all-or-nothing. In L5R, effects that shut down battle or kept military units out of battle were greatly restricted or eliminated, starting in Diamond Edition in 2004, with the ideal being for units to meet in battle and trade actions back and forth. Meanwhile, D&D's 3rd edition redesign in 2001 also filed away the rough corners, with greater PC survivability, less absolute dangers, more whittling down and strategic combats.

This process - inevitable? - represents the fading of the simulation of war into the game of war. Also, the compression of the simulation of life (exploration, politics, intrigue) into the self-same game of war. The truth of Sun Tzu - avoid engagement if victory is not certain, and seek victory by other means than battle - turns into the chivalrous slugfest, approximating equal arms on an equalized battlefield.

Turning a rough-edged simulation into a smooth, equalized game is an achievement much prized, it seems, by game designers anxious to please a certain player demographic: those who at the same time take their games too seriously, while at the same time having little patience for subtle and deadly gameplay. It's as if people would agitate for fool's mate to be removed as a possibility in chess. There's a visible point, though, in many gamers' evolution when they become willing to put down the foam boffers and pick up the katana.
Posted by Roger G-S at 23:07