Count me on the side of quick with a few choices rather than slow with a lot of choices, when it comes to generating characters for adventure games.

My One Page system cuts out an element of choice - not without some controversy as I recall -  by having class determined directly by stats which can, if necessary, be switched around once. It works choice back in, though in a relatively light way, by allowing open-ended selection of background descriptors that can have some effect on when skills work best.

Oh yeah, I changed the skills sheet some so that languages and backgrounds could fit in.  I am pretty happy now with the way backgrounds are a kind of "adjective" or "subject" that modify the base chance that the very generic skill gives you. You only get to use Knowledge to remember facts that are part of your background, and if you try using most skills in a setting or task consistent with your background you get a +2 on that (these are indicated on the new version of the character sheet, below). 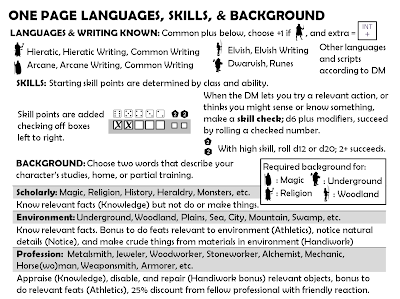 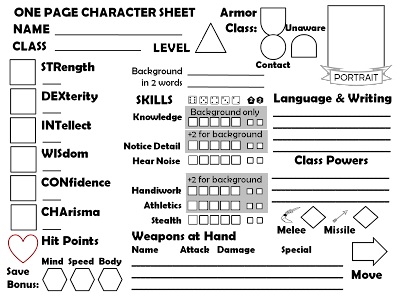 I've noticed recently, though, that character generation with this system tends to bog down around skill and equipment selection.

The solution for equipment is to have random tables for weapons and standard starting armor, and to pass around a deck of cards with the six equipment packages so that the party as a whole is adequately equipped for their first expedition. That's for a future post ...

The solution for skills was simple. As I had it, players were "choosing" only a pip or two of skills to shift around their character sheet. So why not just have skills also flow from class and stats - keeping in mind that the flavor and scope of each skill in my system is modified by the freely chosen background descriptors ...

Anyway, this is what's going on the end of this sheet now.

At this point I'm a little overwhelmed by the multi-ring circus I've got going on in my free time, what with the One Page system ( a little stalled out, as I got done what I needed to run a few games with it, so the impulse to complete is kind of dormant for now ), the Genre Worlds tables, Zak giving the high sign for the Obstacles & Openings cards, and even more, including some contributions to other people's product and a big slow secret project. It will all come complete in the fullness of time, I guess.
Posted by Roger G-S at 22:58