The sin of avarice would seem to be a natural one for the undead guardians of grave treasures. If this sin is a desire to possess more than one needs, then its ultimate expression would be a defiance of the truism "you can't take it with you." The animated mummies of horror films and stories, and the pale, hoard-guarding Barrow-Wights of Tolkien's invention, would then seem to refer to the same evil, the same origin. 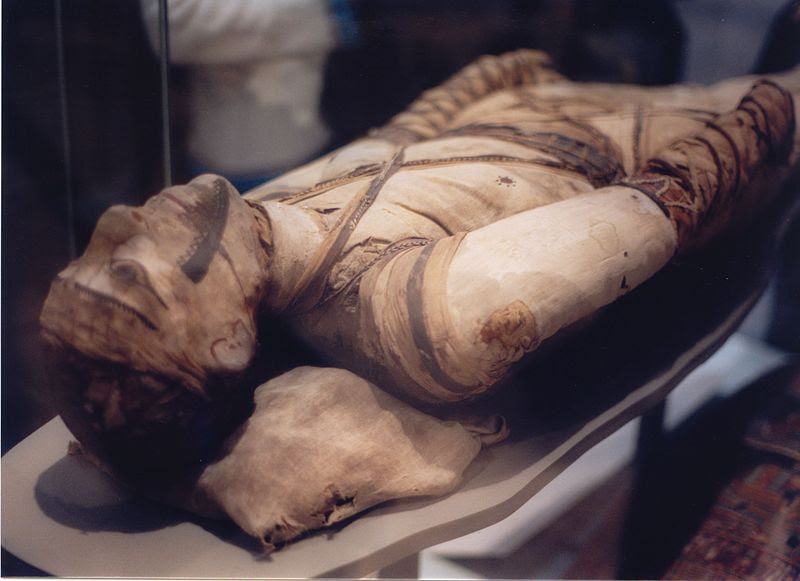 But there's a paradox in this story that goes back to the Norse legends of the draugr: if the avaricious wight is so intent on hoarding its gold, why does it "recruit" the victim and increase the number of wights who share in the treasure? In D&D, the mummy's touch doesn't act this way, but I think this is more due to the obvious problem that the mummy needs to bandage up the bodies of those it kills in order to create others like it.

In fact, there's a lot that's weird about the wight. Tolkien has them as bony things, but they appear in D&D as these snarly bodybuilder types with Land of Oz hair. They're not that strong in hit dice but have the feared and hated ability of level drain, whereas mummies are tougher in combat but have a grab-bag of abilities that are not that nasty, and have a weakness to the common torch. Personally, I'll take the mummies; they come in all kinds of cultural flavors (Aztec ... Peruvian), there were cat and crocodile mummies, and it's not such a long step from those to the horrid animal-human hybrid mummies envisioned by Lovecraft in his ghost-written  Harry Houdini story, Entombed With the Pharaohs.

Anyway, I want to take a different approach than the "living undead" of the last three Deadly Sins, and suggest that wights, mummies, and whatever skeletal guardians may exist are just variations on a single type of creature, united by their motivation to remain undead. These tomb guardian creatures may exist in a lesser form (stats as a wight) or a greater form (stats as a mummy) but each one's appearance is largely a product of the culture that buried it, and whether it awakened soon or late after burial.

There is a special restriction on turning tomb guardians, as with the other sinful undead. Although they may be turned normally, the turning ends if any associate of the cleric picks up any of the creature's treasure. Turning will not succeed while any such associate is carrying loot, either. By ransacking the tomb, the adventurer shows his or her self to be a fellow-sinner in avarice with the undead guardian, and the power of holiness will no longer work as protection.

In addition to only being harmed by magic weapons, tomb guardians have two of the following special attacks, which vary from case to case (d6):

1. Level drain as a wight (but without "recruitment")
2. Rotting disease as a mummy
3. Fear effect as a mummy
4. Unerring tracking of those who stole its treasure (as in the old mummy movies)
5. Enchants a victim within 30'; save (Spell.Mind) or become mentally confused, transported back to the times of the guardian and unwilling to act (as in Lord of the Rings)
6. Shapeshifting at will, into smoke, an unnaturally heavy animal, or seaweed (as in legends of the Norse draugr)
Posted by Roger G-S at 23:51