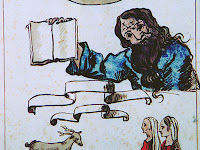 When the Cook of the Mountain returns to Wizards' lair
To beat the Old School drum, or maybe not

And the Monsters and Manuals swell to the number 78
With the crackling flames of men of straw
Then Tupac shall slay the one whose initials are JFK ... (etc., etc.)

In other words, how should dice rolls, DM rulings, and rules procedures be balanced? This sounds strangely familiar to me. But let me try and tie it all together.

The d20 resolution system that Cook co-designed for 3rd edition lays the zones out like this, based on what's known about the action's difficulty class number (DC) and any modifiers that apply:

Going to the other extreme, a system based on DM's say-so and interaction with players looks like this:

Which is not too far from the Grand Unified Model of all Refereed Gaming:
Rules as interpreted by the DM say you can (character skill > challenge level)
If the DM finds no clear "yes" or "no" in the rules or in the DM's head, roll dice against an ability check determined by the rules, or by the DM if the rules do not cover it (resolution from dice roll). Player can describe action in such a way as to change from "no" to "maybe" or "maybe" to "yes" (resolution from information provided)
Rules as interpreted by the DM say you can't (character skill < challenge level)