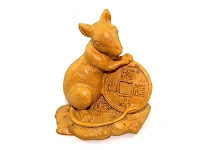 1. The rats have built a 3' cube fort using the coins as partial material, glued together with saliva and chewed wood.  When attacking from the fort they have +4 AC against reprisal as they dart in and out of the holes. They also have set up slingshots within that launch two sharp-edged coins per round with a 50' range, each doing 1-2 hp damage. The fort is destroyed with 3 blows of melee weapons each doing 3 hp or more, but then the material and coins will tumble into a long pit below.

2. (Inversion I) This huge cavern's floor is carpeted with 2000 small rats, a quantity almost impossible to kill without extreme measures. Anyone stepping within the horde will take 6 attacks per round each doing 1 hp and having a 5% chance of disease. In the middle is a stack of nine giant copper discs, each worth 100$.

3. The party must pull an unmarked lever to open a secret door, remove the treasure in the lap of a giant demon idol to uncover a trapdoor leading down, ring a gong in the middle of a vast cavern filled with 1000 inanimate skeleton warriors in order to lower a drawbridge, and stick their naked hands in the mouth of a green devil face to open the final door that leads to ... nine rats and 2000 cp.

4. (Inversion II) There are nine small disks of flesh here which roll on bone-milled edges to attack, each one biting with a sharp-toothed king's face and having a heraldic shield on its other side (1/2 hd, AC 6 [13], MV 15). The treasure is 2000 miniature rats of copper, each the size and weight of one coin, which were minted as an offering of thanks after a plague.

5. The Mad Archmage has a watchful presence here. If any players - in and out of character - complain about the boring or unchallenging nature of the rats and copper pieces, each rat - alive or dead - becomes an angry mature red dragon, and the copper pieces turn to platinum. This effect can be cancelled if any of the players can produce a complete megadungeon of at least 400 rooms that they have authored, each room with contents more interesting than nine rats and 2000 cp.
Posted by Roger G-S at 10:46