"Thangobrind, We Will Avenge You!"

It seems that whenever people discuss the appropriateness of D&D or whatever other roleplaying system to a fictional genre - sword & sorcery, gothic horror, existential horror - the answer that I end up agreeing with is: 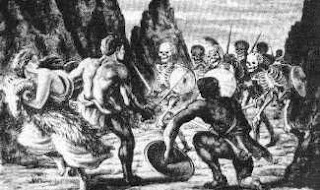 The plot that D&D supports, a band of 3 or more diverse adventurers looking for discovery, gold and glory, comes from one specific kind of fiction, the adventure yarn - originated in the 19th century by the likes of H. Rider Haggard, but with precursors as far back as the Argonautica, the original League of Extraordinary Gentlemen (Hercules! Orpheus! Jason! Castor and Pollux!).

Prof. Tolkien undoubtedly read these stories in his younger years and applied them to his tales, first the treasure hunters of The Hobbit and then the more epic yarn of Lord of the Rings. (If you ever wondered why the Woses are in Return of the King, just give them grass skirts and bones through their noses.)

The other genres don't really support this plot. Sword and sorcery is for one or two protagonists. Horror usually involves a person or group who is in distinct danger of getting killed or worse (I guess early level play supports this, if you take away the characters' ability to fight back.) Gothic horror is a completely different kettle of fish. Stories of chivalry - the kind that drove Don Quijote mad - have a lot of interwoven solo adventures, but nothing like a party adventure.

Sure, these stories can contribute creatures, landscapes, buildings, tricks, traps, enemies, situations. But ultimately, it's D&D's own posse of fighters, thinkers, healers, sneakers that gets dropped into them. Kind of like Abbott and Costello never really went all Gothic tragedy when they met Frankenstein, if your adventuring party gets dropped into Jane Austen, you had best believe they will be checking out the silver candlesticks and dueling Mr. Darcy.

Thangobrind, for those curious, is the protagonist of Lord Dunsany's great, laconic adventure story. Alone, he negotiates perils that are very D&D, gets his hands on a great luminous gem, and meets a sticky end at the hands (?) of its guardian. His story is not D&D ... but the story of the four adventurers who followed in his path and tried to take the gem, that is!
Posted by Roger G-S at 11:05