The Appeal to the Seven Worthy Elders 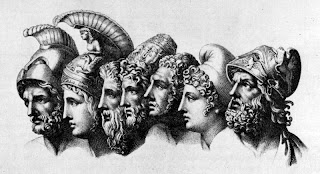 This augury mingles Orange School with Silver School principles. Its author is lost to our knowledge, but was likely prompted by the idea that multiple authorities are more reliable than just one. The efficacy in praxis of the concept is left to the caster to judge, who must be of at least the fourth caster level, notwithstanding this being a spell of the second rank.

On casting this spell, disembodied luminous heads appear in the air before the caster, bearing portions of the intellect and personality of seven deceased sages and solons from long-forgotten kingdoms. A question may be put to them, which they will endeavor to answer. Alas! their knowledge is as dusty as their original tombs. Each of the seven Elders answers in turn. Roll a d12 if the question concerns the natural world, matters more than a thousand years old, or the secrets of the cosmos; a d20 if it concerns matters gone by between a thousand and a hundred years ago; and d100 if you trouble the Elders with the trivia of the past hundred years. If you ask them for a secret that has been known to fewer than ten people, their only true answer will be a profession of ignorance.

Moreover, on an odd roll the answer of the Elder will be delivered with confidence and certitude, while on an even roll, hedging and doubts will surround it.

A great variety of personalities will reply to the call of this spell, which often creates a lively contrast of styles.Below are some of the more frequently encountered characters.