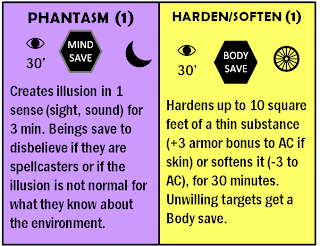 What can I say about the poor illusion? AD&D wrongfooted it with Phantasmal Force, spawning a thousand cries of "I disbelieve!" No, the illusion couldn't just mess with minds; it had to do psychosomatic damage. Yeah, everything had to do damage in those uncreative teenage combat-dungeons of yore, which is why the "2nd level damage gap" quickly got filled with black tentacles and flaming spheres when Unearthed Arcana came around.

But anyway, what can a wiser DM and players do with a mere non-damaging Phantasm? The possibilities are endless, and it becomes a contest of wits between players and DM. As the illusionist here, you are not just trying to create something, but do a psychological bank shot - show a thing that will have an effect on someone or something else. What would a hound made of shadow do when a small fluffy white cat saunters across its field of sight? This is the phantasm a certain gnome conjured up not so long ago in a dire situation, and being on the Faerie Roads (which are halfway already to Toontown) I allowed that a 5+ on d6 would plausibly distract each hound from the combat. I place this spell at first level because it rewards creativity, aids distraction and escape - vital for the puny starting party.

The Harden/Soften spell seems at first glance to be the weakest of the first level lot - a straightforward buff/debuff. But consider that in my system, chain mail plus shield gives AC 16, to which +3 adds a very formidable barrier; kobolds can only hit that 10% of the time.

Consider further that the spell is not just written as a buff/debuff, but as a physical effect. This is crucial to encouraging creative uses. What can you do with an iron flag ... a rope turned rigid ... a rubber sword ... in the name of all that's holy, think of the hairdressing implications!
Posted by Roger G-S at 12:30