Dungeons and No Dragons; Or, RuneQuest Wins Again

Huh. But he's right - DMs do tend to hold back on the iconic monster of the game. . And this all just illustrates how sometimes "iconic" can be a curse, and how RuneQuest won in the end. 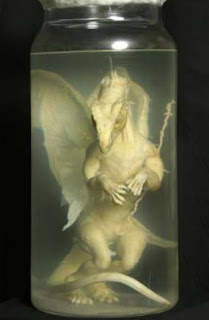 3rd edition D&D represented a wholesale capitulation to RuneQuest design principles - stats for monsters, skills, unified resolution system, damage to objects. Even now RQ is mopping up on the silver coinage standard,apparently to be incorporated in D&D 5th. And another thing it won on was dragons.

In AD&D your first baby dragon would have less than a dozen hit points and you could bag it at 2nd level or so with a few lucky arrow shots, like those Elmore guys I unloaded on last year. Even high level dragons were distinguished mainly by giving and taking large amounts of damage, rather than anything truly amazing.

RuneQuest reached in and grabbed D&D by its second D. Dragons in RQ were demigod-level power mongers and the best you could realistically do was to fight their larval form, the humanoid dragonewts.

Following suit, second edition D&D made dragons more badass, although some of the new abilities backfired - I dare you to think about wing buffets without thinking of Buffalo wing buf-fays. Third edition had hurk gurk colossal great wyrms with their RQ serial numbers filed off.

When the ultimate dragons are Galactus-level challenges, you feel cheap giving the players anything less - kind of like the Firedrake and Ice Lizard in the Fiend Folio weren't popular because they dialed down the value of the dragon brand even further, leaving aside the "Pete's Dragon" influence in their art.

And back to the curse of the iconic. Dragons set up the DM in a double bind. You want your players' first time with a dragon to be special, whereas a minotaur or a manticore can just pop out from behind any old bush. But at the same time there's the nagging doubt that the dragon is also the ultimate cliche, like the skull mountain or idol with giant gem eyes. Both these factors work together to inhibit the dragons from coming out and playing in a lot of campaigns.

The final excuse is that lot of campaigns hover in the low levels, where dragons aren't seen as appropriate foes. The one time I put a dragon in the dungeon it came out of a random room stocking roll on the fly as a party explored the upper works of the Mad Archmage's castle. I think the way I used that dragon - as a self-aware philosophical dilemma - was both suitable to low level players, and broke out of the cliche mold, "the great worm asleep on its pile of treasure" &c. What dragons have going for them is intelligence, which means that old school DMs can drop them in at every level, assuming players are smart enough to grovel abjectly or bargain desperately rather than fight.
Posted by Roger G-S at 10:21