Also known as "My last two posts met, fell in love, and had a baby together." 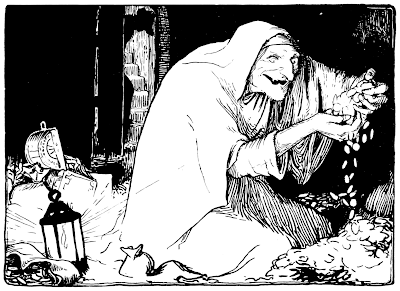 Another Orange-Silver School hybrid, the spell being of the third rank and comprehensible by casters of level five and above. The skinflint wizard of the nineteenth aeon, Hester Zeleny, gave this spell her name and some of her nature.

This spell creates a communicative bond with up to ten thousand coins within a 10' radius of the caster, who must handle a few of the coins to get the spell working. Groups of coins that are visually hidden from the caster are not included.. The coins may be commanded to do any of the following within the spell's three-hour duration:

1. Count themselves. After 1 minute, a spokes-coin for the hoard - the most valuable metal, the most venerable date - leaps up and gives an exact count of the stash, by material and number. Coins speak in the voice of the monarch, deity or other personage on their obverse, otherwise in the voice of whatever heraldic beast decorates either side, and lacking even that, in a tinny, emotionless voice.

2. Pack themselves. In the space of 1 minute, the coins roll and dutifully hop into whatever new containers the caster provides, organizing themselves as best they can.

3. Roll on. The coins arise en masse, balance themselves on their edges, and roll as a herd, subject to the caster's will, as long as he or she maintains eye contact with the lead coins. The mass moves at a rate from 60' to 120.' Two-legged creatures who try to move with coins underfoot must save as if standing on magical grease or fall, unless the caster commands the swarm to avoid them.

4. Tell tales. One of the coins, at the caster's choice, once per casting of the spell, will relate how it last changed hands (other than to the caster). This may include what the trade was for, who stole it or picked it up, etc.
Posted by Roger G-S at 12:00