Adventure Format: All On One Spread

Just a quick sharing of an idea I had. Working on an adventure that will form the first "leg" of a larger megadungeon (and a stand-alone experience even if the whole thing is never finished), it occurred to me to banish two of the most frequent action-stoppers when I GM -

Pausing to look up monster stats

Pausing to look up the map.

So why not take a cue from one-page dungeons without being literally one-page, putting everything you need to know to play in a given section of the adventure on one two-page spread?

Below - intentionally at low resolution for now - is how that has turned out. Beside the map is a section with minimal monster stats, and space below each monster listing to mark hit points or make notes. I'm a believer in letting DMs roll their own hit points, especially because systems disagree on what a monster hit die should be. 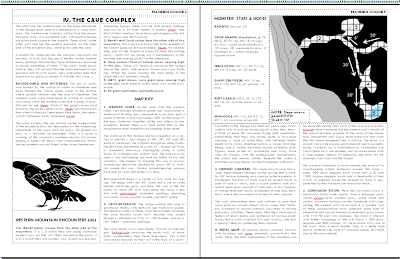 There's going to be a larger map that shows how all the sections hook up, and probably it's a good idea to put notes about which pages the passages off map lead to, once I have that arranged.
Posted by Roger G-S at 12:30