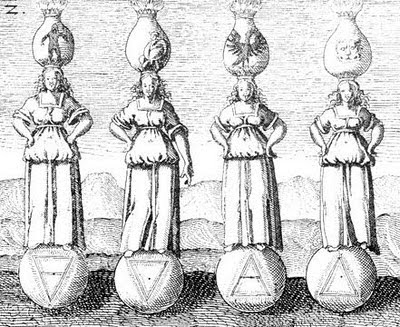 Cerysse the alchemist-wizard sometimes took her allegories too literally. By casting this best-known of her spells, you conjure four marble statues of maidens which stand on spheres representing the four elements and carry unbreakable glass vases on their heads, each with a different being inside. This is a spell available to wizards of the seventh caster level, being at the fourth spell rank, and partakes of the Silver (Summoning) and White (abjuration) schools.

The seven-foot-tall maidens must each come into being within 5' of the nearest one. Otherwise, they can be positioned and turned in any configuration desired, but will not move until the spell ends.They remain in existence for an hour and then vanish.

Each one has the effect of excluding a certain type of material  from moving past her, from her front to her back, in a 10' high by 15' wide plane centered on her. A person carrying that kind of material and trying to pass will have to get rid of it, for the field will detain it. From left to right in the illustration, the maidens guard against:

Earth: Stone and metal are excluded
Water: Fresh and salt water are excluded, but not water contained in a living thing or mingled with organic material (such as wine, potions).
Air: Air cannot flow through, but it is harder than you'd expect to suffocate someone using this; one person at rest takes 12 hours to use up the oxygen in a cubic meter of air.
Fire: Any heat above 100 degrees C (212 F) will be left outside the barrier, though the previously heated object might still pass through.

Each maiden's jar also contains a guardian creature which will emerge and attack any living being who enters a 10' arc in front of the caryatid. The creature dissolves if destroyed.

If a stone maiden takes enough damage to break it (4 or more blows with a blunt instrument each doing 7 or more points of damage), it crumbles into dust, its creature vanishes, and its effect ceases.

This spell is a frequent candidate for permanence status in guarding a wizard's lair, the four caryatids being positioned one behind the other to create a gauntlet of sorts in a corridor.
Posted by Roger G-S at 22:58