A game that's appealing to new and nontraditional players need not have simple rules, just a referee who's willing to take on the burden of dealing with the rules ... at least that's what I argued a few weeks ago.

I want to get specific now about ways  to tackle an issue I have special awareness of. For the past 15 years or so I've been teaching statistics and methods at the undergraduate and masters' level to psychology students. A lot of them are smart, but just have an unease or outright dislike when it comes to numbers. This is often a gender issue, but not always. Of course, to use statistics I have to deal with numbers, but try to soften the blow by using concepts and figures more than equations in teaching. 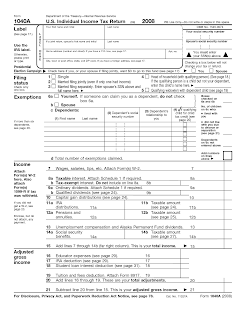 And how many would be more at ease playing a game that rewards their talents of verbal expression, imagination, logical thinking, problem solving - while only having to deal with six one-digit numbers, a hit point score, and their money and experience totals?

Here's the current character sheet I use for my games (click these to enlarge). 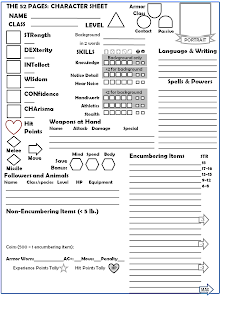 Now here it is split up into two: a basic player's sheet stripped of most of the statistics and numbers, and a basic referee roster where they all go. 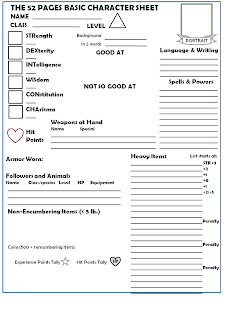 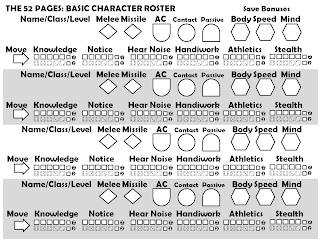 For extra simplicity, I suggest flipping the bonus and score areas of the ability scores, so that the 3-18 roll goes in the little dash to the right, and the bonus/penalty/0 goes into the big box on the left.

The "good at" and "not so good at" boxes are there for the player to make notes on the DM's summing up of their skills.

Most of my current players are avid roleplayers who are comfortable with the numbers and sums. Some of them would even feel uncomfortable without being able to look and see exactly what their character numbers do. But if I ever have a chance to run games for non-gamers - kids or grownups - I'll give this approach a shot.