Is the Cartoon Dungeon Master Your Petty God?

After titling my antepenultimate post "Is the Dungeon Master Your Cleric's God?" I couldn't resist ...

What if the characters in your game gained some awareness about who was really running the show? What if that much-battered fourth wall came tumbling down yet again? What if this guy was a Petty God? I'll tell you straight off the bat,  he ain't showing up to give out no extra healing surges ... 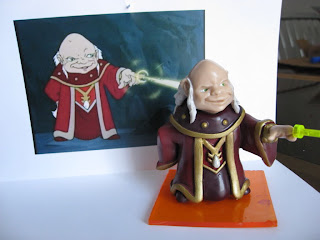 Name: The Dungeon Master
Symbol: A rosary of the five Platonic solids
Alignment: Neutral
Movement: Immobile; teleports without error
Armor Class: 0 [19]
Hit Points (Hit Dice): 75hp (15 HD)
Attacks: None (but can cast any magic-user spell at will)
Damage: None
Save: MU15
Morale: 7
Hoard Class: ALL OF THEM, each stored away behind a near-impossible trap or trick
XP: -500, you knucklehead, you killed the Dungeon Master

To those who fervently believe that all is not mere happenstance and random encounters ... to those who believe in a cosmic Holder of the Dice, Stocker of Ruins and Sketcher of Maps who looks after the challenges and rewards of those who seek adventure ... the Dungeon Master's avatar will sometimes appear, as an elderly, gnomic savant of either gender. "Gods? I invented your whole pantheon in ninth grade!"

Organized worship and priesthood of the Dungeon Master is nearly non-existent. Those holy people who do devote themselves to service of this godling - or over-god - immure themselves in dangerous dungeons, where they offer healing services and advice, and do not tend to survive very long.

When a band of loyal adventurers, after much effort and cogitation, is truly at wits' end for what to do, there is a 1% spontaneous chance that the Dungeon Master will appear. He does not reply to intentional entreaties, but the chance of appearing increases to 10% if someone in the party mentions her offhand, +5% in either case if the Polyhedral Rosary is held fervidly by a party member. There is also a 5% chance of an appearance, shifted two rows into the hostile, if the players find some way to abusively exploit the rules.

The Dungeon Master is impressed by resourcefulness and resolution, unimpressed by rules arguing, whining and passivity. Reaction results are as follows:

Friendly: Will give the information sought. In this mood she often highlights the way to the best-prepared adventure nearby, by causing an illusionary manifestation of two iron tracks stretching into the correct direction.

Cordial: Will give the information sought, but disguised as an annoying rhyme or riddle.

Neutral: Will give only tangentially relevant information or unhelpful babble. In the case of a rules abuse, will mock the players with the epithets "twink," "munchkin" and so on, but allow the rules exploit to continue until the next "cosmic patch" in d8 days.

Unfriendly: Will share unflattering truths about the players' performance so far, topped off with a patronizing, pat moral delivered to some unseen viewer. If unfriendly or worse, in the case of summoning to deal with a rules abuse, the rule will be corrected immediately, with a mysterious chiming and a great shift in the laws of the multiverse.

Hostile: Will cause random wandering monsters or events to appear, often rolled from a completely irrelevant table to show off his power; or will use spells to hinder and bother the party.
Posted by Roger G-S at 12:30